ASU vs. Arizona: The Details of Domination

Beating your rival a few times in a row is to be expected. But 32 straight? That's absolute domination.

Share All sharing options for: ASU vs. Arizona: The Details of Domination

February 21st, 2009 had all the makings of being just another run-of-the-mill Saturday.

A gallon of gas was costing drivers $1.91. For some reason, Madea Goes to Jail topped the box office. President Obama was still unpacking boxes from his move into the White House just a month prior. College students around the state made poor decisions.

However, one notable event did happen. On an ice rink in the middle of the desert, the Arizona Wildcats beat Arizona State 4-3 in an exciting game that went to a shootout.

So what? Hockey games happen all the time, right?

True. But that night would be the last time Arizona would know the sweet taste of victory against their hated rivals. The joy of that win for the Wildcats has come, gone, and dissipated into the ether, exactly like the 1,467 days that have passed since that night.

Thanks to the Sun Devils' pair of victories this past weekend over Arizona down in Tucson, ASU's winning streak over UofA now stands at a staggering 32 games. The Sun Devils improved to 33-7-1 on the year and will now head to Chicago as the No. 2 overall seed in the ACHA National Tournament. While ASU will look to move through the ACHA bracket towards a national championship, the Wildcats' season has ended with a record of 15-22-1.

Yet despite the early end to the season and "The Streak" being alive and well, the Wildcats are not lacking in confidence. In fact, they believe that not only should they have won these two most recent games, but that many victories are yet to come.

"The streak will end, and sooner or later we'll be the stronger team," Arizona head coach Sean Hogan told the Daily Wildcat following the 32nd defeat.

"We had so many chances. We outplayed them honestly 60 minutes of each game," said Wildcat defenseman Bryan Drazner. "We deserved that game, they know that they didn't deserve that game. This is a rebuilding year. Next year we're going to come back stronger and we expect to beat them four, five, six, seven, eight, nine times."

Belief in your team is one thing, and a necessary and vital element in sports. But both objective and subjective looks suggest that the gap between the schools is not in danger of extinction, but rather, is widening in ASU's favor.

"They say the same thing every year," ASU head coach Greg Powers said. "Have they gotten better over the last couple of years? Yes, they have. But so have we. That's what I don't think people understand. We keep adding to a very, very good hockey team, and we're going to again. Our recruiting class is going to be unbelievably good this year. It's all about not getting complacent and allowing that gap to close."

That success on the recruiting trails is one of the primary reasons for ASU's prolonged run against their rivals. Powers, along with team general manager Ken Lind and the overall allure of the Tempe area, have made Arizona State one of the premier destinations for top young hockey talent. The proof can easily be found with a scan of the rosters.

"If you look at success at Junior A hockey, essentially our entire roster has that," Powers said. "They don't have too many guys on their roster that do. From a recruiting standpoint, it's not always about finding the best kid, it's about finding the right kid."

While Coach Powers certainly brings an expert insight into "The Streak", some fans in Tuscon may take issue with his assessments.

OK, so let's examine some cold, hard numbers. In the end, hockey is simple—score more goals than the other guys. If a team is closing the gap, the margins will be getting tighter. That's simply not the case here.

Goals Scored During The Streak 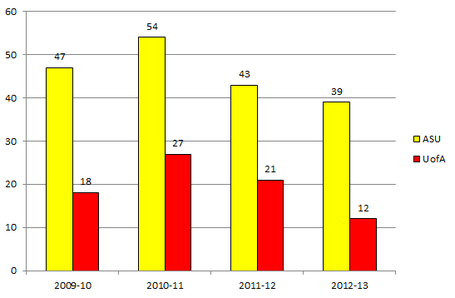 The big trend here is the ever dwindling offensive punch mustered by the Wildcats. Two years ago, they managed to net 3.4 goals-per-game (yet gave up double that amount). However, the Sun Devil defense has improved so much over the last two seasons that in eight games this season, UofA managed just a meager 1.5, and scored more than once just twice. The 12 goals represented the lowest Arizona total against ASU over the past seven years.

"What that tells me is that we're getting better and better defensively, and they have better talent than they did two or three years ago." said Powers. "They had 12 goals in eight games. We had 11 in one game against them. I know they like to say ‘The gap is closing. The gap is closing.' But to me, it hasn't closed."

So one-sided has this rivalry become, that often times the Sun Devils' greatest hurdle to clear is not the threat posed by the Wildcats on the ice, but the consequences of ASU's own sustained success.

"No matter how big or bitter of a rivalry it is, naturally, it's going to get a little tedious for the team that's always on the winning end" said Powers. "It's easy for the underdog to get up. When they play us, they are as high as can be. They want to knock that streak. Mentally, it's a really tough thing to focus on eight games against your rival when you've won so many in a row, and that's what's been so impressive about what our players have been able to do in pulling out 32 straight wins. When they come focused and do what we want, we've hung double digits on UofA."

Another factor in ASU's continued dominance is their proactive and dedicated approach to the series. The importance of the rivalry with Arizona is something that is continually stressed at all levels of the program, from the moment a recruit comes into first contact with ASU on though until the end of his on-ice career in Tempe.

"It's continuing to build and not resting on our laurels. We educate our kids immediately through the recruiting process, and especially after the team is complete and formed at the start of the year, we educate them on the history of the rivalry. We respect the history of it. It touches a special place with me, because I'm a Sun Devil alum. It means everything to me, and it filters down to our players."

But Powers is much more than just an alum. He is now 24-0 against UofA as a head coach, and he was an assistant for the first eight wins of the current streak. He also has seen defeat at the hands of the Wildcats, both as a player and a coach, and those feelings helped to strengthen his resolve to continue the run.

"I was part of it as a player too. I was about .500 as a player against UofA. Anytime you lose to your rival, it hurts. It's not a feeling I want any of my guys to ever have. Luckily, there's not a guy on our roster who has felt that.

"As long as I'm here, I'm going to do everything in my power not to let that gap close, and I don't plan on it closing anytime soon."

In the end, Powers and the program are realistic and know that they can't argue with Isaac Newton—what goes up must at some point come down.

"At some point, it's going to end. Anytime you play someone eight times a year, it's bound to happen. Will it happen next year? I certainly hope not. I think we can win another eight against them, based on what we have coming back and what we have coming in. They are improving. Coach Hogan has done a good job. I think they are a better team today than when he took them over."

However, based on the statistical trends, the influx of talent into Tempe, and the current state of each program, Powers doesn't advise anyone in Tucson to hold their breath waiting for an end to "The Streak".