New Sparky Mascot: Building a Bond with the Future on Complaints in the Present

The new Sparky isn't going over too well with adults, but that's not the point.

Share All sharing options for: New Sparky Mascot: Building a Bond with the Future on Complaints in the Present

Look into his eyes. What do you feel?

Are you joyously lost in a sea of Sun Devil pride? Or are you terrified of your impending damnation to Hell? Perhaps it's a sense of "blah"?

If you're ASU, you're feeling a fattening wallet and optimism in pulling in the youth demographic.

Earlier today, Arizona State unveiled the latest iteration of the beloved Sparky mascot (more pics at that link), who will make his debut at the spring football game next month. In conjunction with Disney, Sparky received a makeover that is not exactly going over well with fans. 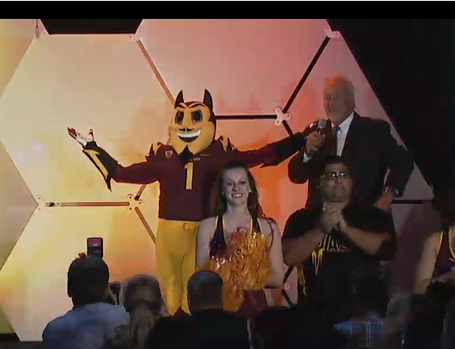 Some have called it a bumblebee. Others a satanic Buzz Lightyear. A few think it is too close to Japanese anime.

Sure, I've got my nits to pick. The eyes are a little scary, and could be an issue for kids. Maroon head doesn't match the jersey. The grin is a bit too fiendish (yes, he's a devil, but still). However, the forearm sleeves I kinda like...

A few recent ASU's players are among those not pleased.

Before fans pick up the bad kind of pitchforks and storm the Sun Devil Stadium castle, it's should be made clear that the current Sparky logo is not going to change.

"There will be no changes to the iconic Sparky logo," athletic director Steve Patterson said. 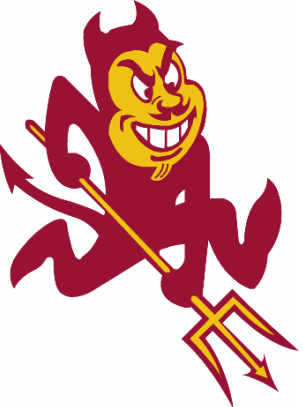 Don't worry. You're not going anywhere.

But what is happening is ASU looking ahead to the next generation or three of Sun Devil fans.

In this endeavor, ASU and Disney are essentially saying "It's not broke, we're not fixing it, but we're adding things to make it sustainable." No one in the world knows how to market better to children than Disney, and that's exactly what this is all about.

The Sparky mascot we saw today may have ruffled the feather of fans, but it's just the latest in a long, long line of updates and changes to the Devil patrolling the sidelines. This is just a way to keep Sparky current and relevant. OK, that's fine. 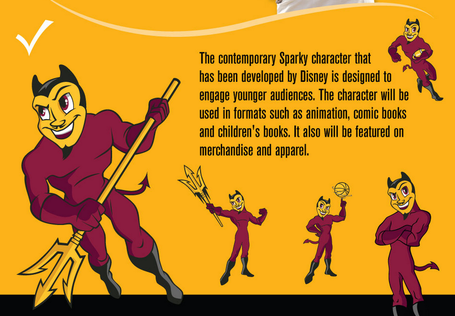 Yeah, there is a definite Poochie vibe at play here. For those uninitiated with golden-era references from The Simpsons, Poochie was a character unnecessarily added to the in-show Itchy and Scratchy cartoon, because studio execs wanted to hip up the show and make a quick buck.

That's true to a degree here. Cartoons, kids books, shirts and all kinds of new, youth-friendly Sparky merchandise is already on it's way to stores. Cha-ching. While it may seem to some like a cheap cash-in, cheap cash ins also put money back into the university.

As a whole, this isn't a change so much as an addition to the Sparky stable. The Walt Disney look alike that we've all come to know and love will still be ever present on merchandise, fields and courts. This new Sparky with his maroon jumpsuit will (they hope) become a beloved icon for your children, and get their bond with ASU going early.

In the end, it's not like ASU did away with the Yankee's interlocking "NY", or stripped away the Steelers' perfect logo. Nothing sacred has been sullied.

Sparky is indeed an institution for ASU, but as an idea and as a presence, not as a definitive "look". He's been a devilish chameleon over the years, changing his appearance time and time again. Yet no matter how scary, cool, hideous or sharp, he's been there, rallying the fans for the maroon-and-gold. That's not changing, and it never will.

It just may take some getting used to.