There's no better way to pick your March Madness bracket than with mascots. Throw your preconceptions out the window!

Share All sharing options for: NCAA Brackets 2013: Using Mascots To Determine A Champion

The 2013 NCAA Tournament is upon us, and people across America are building their brackets in hopes of winning an office pool or $10,000 from Yahoo! or ESPN. With 63 games to project, putting together a good bracket for March Madness is nearly impossible. Why not use mascots to determine a champion? It's as good as an idea as any other.

When building a bracket based on mascots, you have to be willing to suspend reality and believe in the power of the underdog. Basketball talent goes out the window, but one thing we must commit to? All #1 seeds will advance in the first round. Other than that, all bets are off, and Cinderella might never go home, even after the clock has struck midnight.

Before we begin, allow me to say that some mascots in this year's bracket are absolutely bizarre. Middle Tennessee blends a horse, Elvis and some blue paint into Lightning, a unbridled disaster that somehow charms his way into your heart. It might just be those slightly yellow teeth -- better get to a dentist immediately!

Kansas State ruins a perfectly good Wildcat head by putting it on the body of a non-athletic dude wearing a baggy uniform that fell out of the hamper. Belmont's Bruin is actually pretty good, reflecting the fiendish face of a young bear that still probably sleeps with a blankie. New Mexico, in an absurd decision, gave "Lobo Louie" a Gene Simmons-esque tongue that permanently hangs out the right side of his mouth. Rabies, much? Finally, Florida Gulf Coast's mascot, Azul, looks like an experiment gone horribly awry, featuring both a beak and clenched teeth alongside both wings and arms. This freakshow is straight up terrifying.

The weakest mascot regional by far was the East. The top seed, Indiana, does not even have an official mascot, and they fell in the second round to an ugly mascot from NC State. California and Syracuse don't fare much better, but the lack of quality opponents advances Oski the bear from Cal all the way to the Elite 8.

What criteria was used in the making of this bracket? There were two important factors.

No one can underestimate the power of a beautiful mascot. They drive the crowd into a frenzy with their antics, they charge $20 a pop to get their picture taken with a fan -- they are the ultimate crowd pleaser. Both women and men alike are drawn to the aesthetic beauty of a good, pretty mascot.

Some great examples of beautiful mascots include Boomer, with those blue eyes that would make any self-respecting Oklahoman swoon. It's like OU conjured up a horse version of Zac Efron to lead the schooner across the field of battle. Another good one? Truman the Tiger from Mizzou. He's just a handsome guy with a lot of history.

Does being beautiful amount to anything? Not exactly, but it has long been said that those with good looks get further than those who stand alone in the corner at the prom. Maybe that's not the saying, but you know.

The great Kanye West said that "no one man should have all that power." Of course, he was admitting that the power should rest in the hands of our friendly animal overlords, particularly when it comes to collegiate competition.

Human mascots just don't move the needle. A Spartan, a Rebel, whatever the hell La Salle does with their mascot, it is a bit freaky. You need a separation of reality and fantasy: you need an animal that can walk, dance and make funny poses. You need a mascot that looks like Scooby Doo. 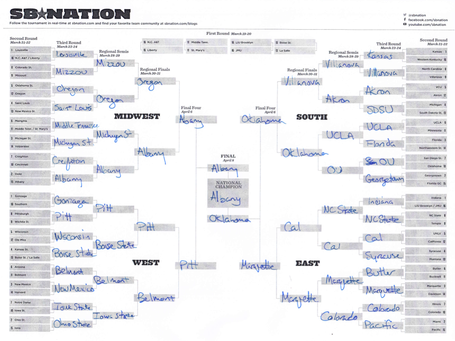 What is this, you say? Albany has won the NCAA Tournament? Blasphemy! I'd tend to agree. However, as I just mentioned, Albany's mascot is the Great Dane, and they do not hesitate to model both his appearance and his collar after the Greatest Dane in history. Other quality mascots include the Pitt Panther and the Marquette Golden Eagle. All of the competitors in the Final Four were high quality and the decision-making process was grueling.

When it came down to a battle between blue eyes (Boomer) and the cartoon dog, we had to go with nostalgia. Congratulations to the Albany Great Danes!

Looking for an NCAA Tournament bracket? Get that here. We've also got your NIT bracket needs covered.