Darby in the lead

“People call it being a leader. I call it just being myself."

Great defense is made of more than just aggressive blitz schemes, steady gap control and tight coverage. Last fall, Arizona State experienced a remarkable turnaround that proved just how true that point is.

Over the course of a single offseason, they transitioned from a passive unit prone to giving up big plays into one of the nation's most disruptive and effective groups. The new scheme installed by Todd Graham and his staff was the catalyst for the renaissance, but the leadership from the key players proved to be the sustaining factor.

At the center of the unit was Brandon Magee, the charismatic face of the program and a young man whose leadership ability was often heralded among the best the program had ever seen. Keelan Johnson earned a team captain spot for his relentless work ethic and continued development over the years, and Deveron Carr was a key senior starter who served as an example for the rest of the roster.

While that trio was earning their well-deserved praise, another Sun Devil was stepping his game up, both on and off the field. 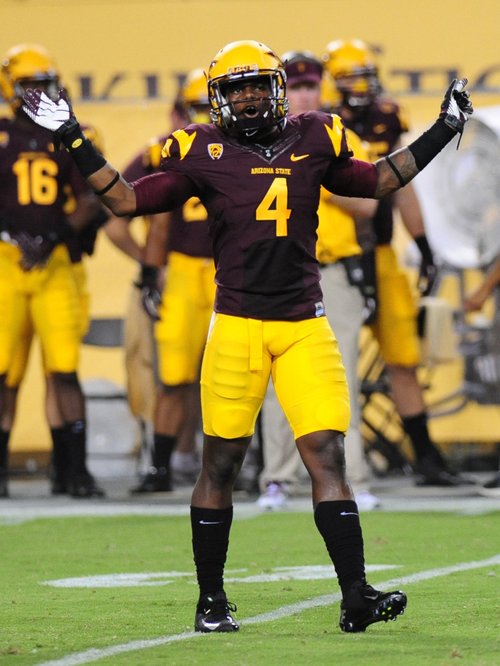 Alden Darby entered his junior season as a starter for the first time, parlaying a productive part-time role in 2011 into the team's top boundary safety in 2012. The 5-foot-11, 188-pounder's work ethic, playmaking ability and athleticism helped him have a terrific debut season.

Darby filled the stat sheet, making 80 tackles, 5.5 for loss, two sacks and three interceptions, one of which he returned 70 yards for a touchdown against USC. That performance earned him second-team All-Pac-12 honors, which Darby sees as both validation and motivation.

"It was huge. I felt very happy for it," said Darby. "It just goes to show that I can work harder. Making second-team, I worked hard last year, so that means that in order to make first-team and become an All-American, I got to pick it up even more now."

While his playmaking ability on the field figures to see another jump after his 2012 performance, team need also dictates that the blossoming leadership ability continues on its upward trend.

"Brandon, Keelan and Deveron, those are three great guys to have on your team and they are huge leaders, but now it's time to develop new ones," said Darby. "That's what we've been working on this whole winter break-developing new leaders."

Never one to back down from any challenge, the relentless Darby is putting himself atop the list of those who must step up for the Sun Devils.

"I have to elevate it. I have to take it to a whole other level. I need to continue to be me, of course, but I need to push guys harder and need to encourage more people, get guys going and really take charge of the team."

"in order to make first-team and become an All-American, I got to pick it up even more now."

Taking charge of a situation and striving to be the best at whatever he is doing is nothing new to Darby. The Long Beach, California native has been wired to be a leader from an early age, and is unfazed by the responsibilities of being a looked-to figure on a team with Rose Bowl aspirations.

His development into one of the team's top leaders has been greatly aided over the years by some of his peers who excelled in that area. One of the formative influences came from former teammate and current Denver Bronco Omar Bolden, whose positive living mantra gave Darby a sterling example to emulate. 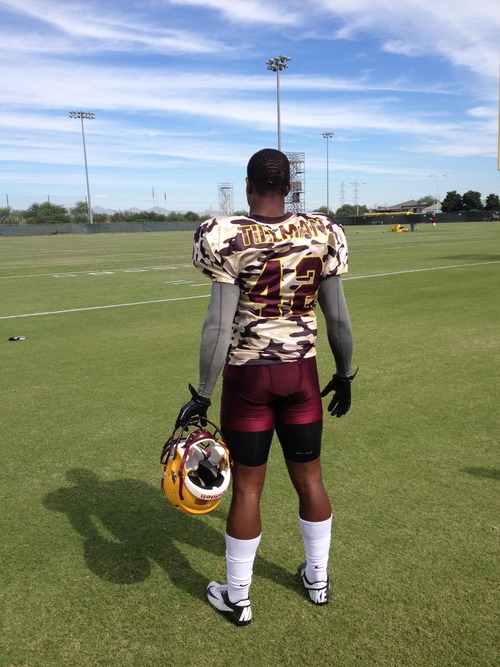 "Just looking at the type of guy he was on the field and off the field. I really got attached to him and I really liked a lot of the things he did in life," Darby said.

More recently, Darby benefited greatly from playing with, and learning from, Magee. One of the primary lessons learned came naturally to Darby-set a positive example at all times, regardless of who is around.

"I learned a lot from him. He was a leader on and off the field. It was genuinely him," said Darby. "He didn't turn it on when the coaches were there, or when the media was in his face. He was a leader at everything he did, no matter who was there. That's what I learned from him. You can't just turn it on when the coaches are looking or the cameras are on. It's what you do when people aren't looking."

Perhaps the greatest indication of Darby's leadership potential came last October, when Graham made Darby the first honoree in a new tradition. On a team with standouts like Magee, Johnson, and Will Sutton, among others, Darby was chosen to wear a camouflage Pat Tillman jersey in practice as a symbol of his outstanding work on and off the field.

"We call it PT42. It's a person who embodies all the things that he did," Graham said at the time. "To earn that jersey is really hard to do, and Alden Darby earned it, because every single day, he's brought it in the classroom, the community, on the field, off the field. I think he's having an All-Pac-12 season. He's just been phenomenal."

"You need to do things other people don't do. You can't be normal."

Graham was spot on, and such an honor was not taken lightly by its recipient.

"It meant a lot to me. It showed me that hard work, dedication, effort and passion for the game doesn't go unnoticed," Darby said.

It certainly did not take until October for the new coaching staff to identify Darby as one of the most critical players on the roster, and Graham in particular has been a major influence on Darby not only becoming a better football player, but a better human being as well over the last 14 months.

"They (the coaching staff) helped me a lot, on the field and off the field," said Darby. "Coach Graham talks a lot about character and discipline and bringing out the best character out of each individual day in and day out. The things that he teaches and the way the he coaches has helped me so much. It's helped our team a lot, too. The way he runs this program is exactly how the NFL runs theirs. He gets us ready not only for the next level but for life in general." 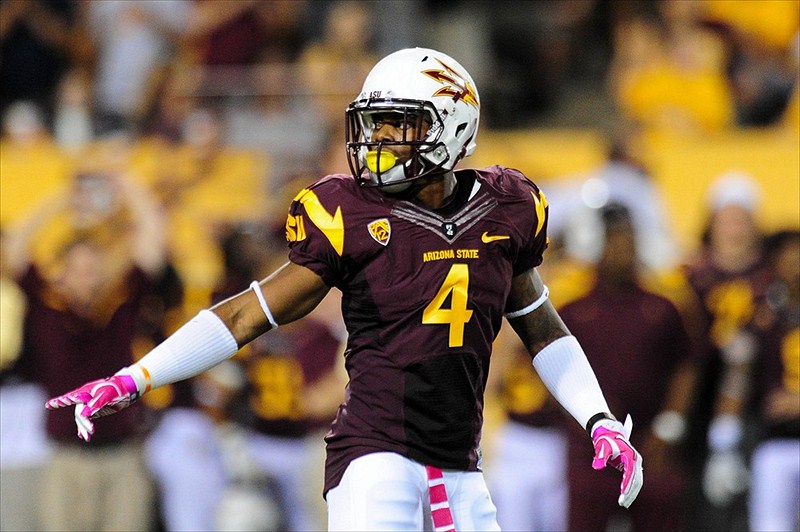 Darby seems to be ready for the challenges ahead in being a leader both by example and by voice. As he heads into his senior year, he knows that great teams need great leaders, and that those players can not relent for one minute. True leaders are held together by several qualities.

"My goal for myself is just to do whatever it takes, day in and day out, to get this team to win the Rose Bowl."

"Hard work. Dedication. Character. Discipline. Accountability. Your competitiveness has to be second to none," Darby said. "You got to want to compete in everything. You need to do things other people don't do. You can't be normal.

"You need to reach out and go beyond. You need to work out and study film when people are sleeping. When times get hard, people are going to look to you. ‘Darby, what do we do?' You want to be able to answer those questions for them. That right there separates you." 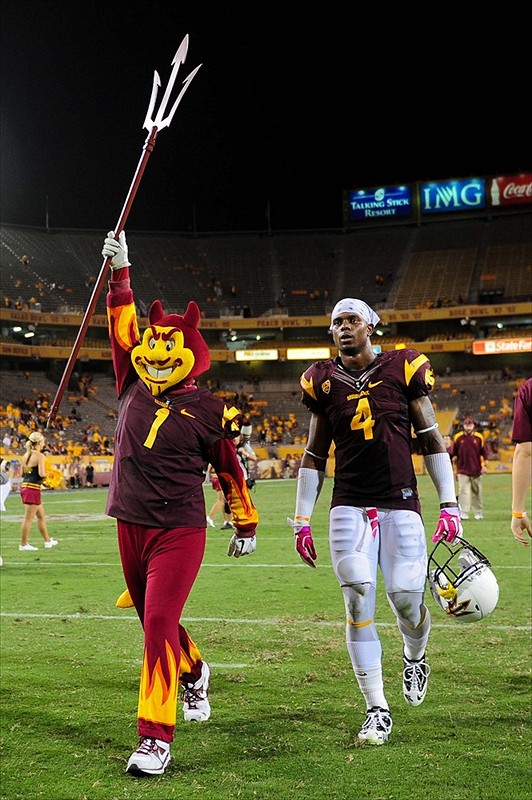 While Darby may very well inherit his former teammate's mantle as the team's go-to leadership presence, he certainly will not be alone. He sees several current Sun Devils stepping up to help fill the void on both sides of the ball.

"I see Osahon Irabor stepping up big time. He's been with the program for a while. He's going to be a good guy. Kody Koebensky and Evan Finkenberg. Taylor Kelly, even though he's a little younger than me, I look up to him a lot. A lot of the guys who have been here and put in the time, seen the coaching change and been here through the years. "

Darby is one of eight returning starters to an ASU defense that posted many lofty rankings in 2012. The Sun Devils led the nation in tackles-for-loss, were second in sacks, and third in overall pass defense. That success could be seen by some as the peak, but for Darby, another year in the defensive system is priming the unit for bigger and better things.

"We can be so much better. There's no ceiling," Darby said. "This is year two of the system. We did a lot of great things in year one, but we also did a lot of bad things. With this year under our belt, with this extra year of training, we know how the program is, we know the defense, so it's going to be even better. "

Looking ahead, Darby has set the bar mighty high on his expectations for his final season in Tempe, one in which his play and leadership will be a defining factor.

The road to Pasadena will be a difficult journey, but it should be made a little easier with Darby leading the way. 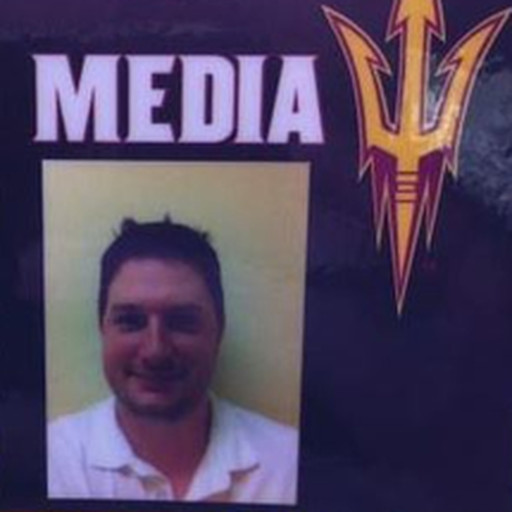 Brad Denny covers Arizona sports for KTVK Channel 3, and previously was the managing editor for House of Sparky. He also co-hosts "Speak for the Devils", the premier ASU football podcast. Brad is also a member of the Football Writers Association of America (FWAA) and the National Football Foundation (NFF).