Share All sharing options for: The Underrated Files #7: Steve Holden

The Sun Devils have had more than a few players over the years that have the rare ability to unconsciously control a fan's actions. You know the type. As soon as they touch the ball, you find yourself immediately sliding to the edge of your seat. Your heartbeat begins to speed up. The magic is about to happen.

These players are the most explosive, dynamic threats on the field, guys who can turn any touch, no matter how remote, into a game-changing and jaw-dropping touchdown.

In ASU's history, perhaps no player had this quality in greater abundance than wingback Steve Holden, who terrorized and dazzled in maroon and gold from 1970 through 1972.

Holden saw some light action in the passing game during the 1970 season, catching 14 passes and one touchdown, but it was his work on punt returns gave that undefeated ASU team a huge lift. He took 20 punts back 381 yards, then a record and still the fourth-highest single-season yardage total in school history. Holden ran two of those punts back for scores, including a then-record 94 yards (now second all-time to Morris Owens' 95 in 1972). In the Sun Devils' Peach Bowl win to preserve the undefeated year, Holden had a 13-yard touchdown run. Such special teams magnificence earned him a spot on the All-WAC team.

But Holden was just getting started.

The next year, Holden was even better. He was again amazing on punt returns, breaking his own school record with 426 yards on punts (now second all-time) and had a 90-yard touchdown against Wyoming. But it was in the receiving game where he made his greatest gains. He became a big-play wide receiver, hauling in 23 passes for 527 yards (a terrific 22.9 yards-per-catch average) and 10 touchdowns. The Sun Devils also gave him a few carries, as he ran 21 times for 182 yards and a touchdown. 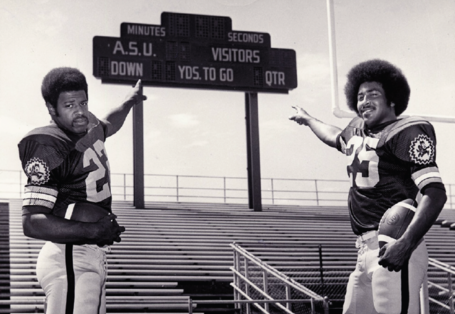 In the wild 1971 Fiesta Bowl against Florida State, Holden was the difference. He caught a key 55-yard touchdown pass from Danny White in the second quarter to tie the game at 21, and then returned a fourth quarter punt 68-yards for a go-ahead score in what would be a 45-38 win. Another All-WAC team selection followed.

Holden's development continued in 1972, another All-WAC season for the playmaker. He was again sensational on punt returns, with another 313 yards and a score, but he took another big leap in the passing game and led the team with 42 receptions for 911 yards and what was then a school record with 12 receiving touchdowns (now third). In addition to his All-WAC honors, he also made the All-American second-team.

By the time he was a first round pick--16th overall--by the Cleveland Browns, Holden had set the ASU career record with 1,120 punt return yards, a mark he still holds by a wide margin. As a pro, Holden played four years in Cleveland and one in Cincinnati, totaling 62 receptions for 927 yards and four touchdowns.

In 1984, Holden secured his rightful place in the ASU Sports Hall of Fame.