The Devil is in the Defense

As the cheers and echoes of 51,000 screaming fans grew louder, memories of darker days rushed back into the minds of the Arizona State players.

The Arizona Wildcats had the ball inside the red zone, and appeared ready to take a commanding two-possession lead with roughly eight minutes left to play.

Less than a year earlier, the Sun Devils suffered a brutal fourth quarter collapse on their home field against a Wildcat team that won just two of its 10 games to date. After the game, the city of Tempe was silent, and the Sun Devils vowed to never let that feeling return.

To earn revenge a year later, Arizona State would have to rely on its defense to silence the sea of screaming, red-clad Wildcat fans. Many of the current Sun Devils defenders were also on the field the year before when Arizona scored 14 unanswered points to pull off a stunning victory.

However, this was 2012, and this was the first true test for Todd Graham's defense. Since being hired in December 2011, Graham asked his players to commit themselves to giving their all and to follow one simple mantra when they step on the field.

"Be physical and attack."

"Discipline. Coach Graham is hard-nosed. He likes perfection and accepts nothing less from you." 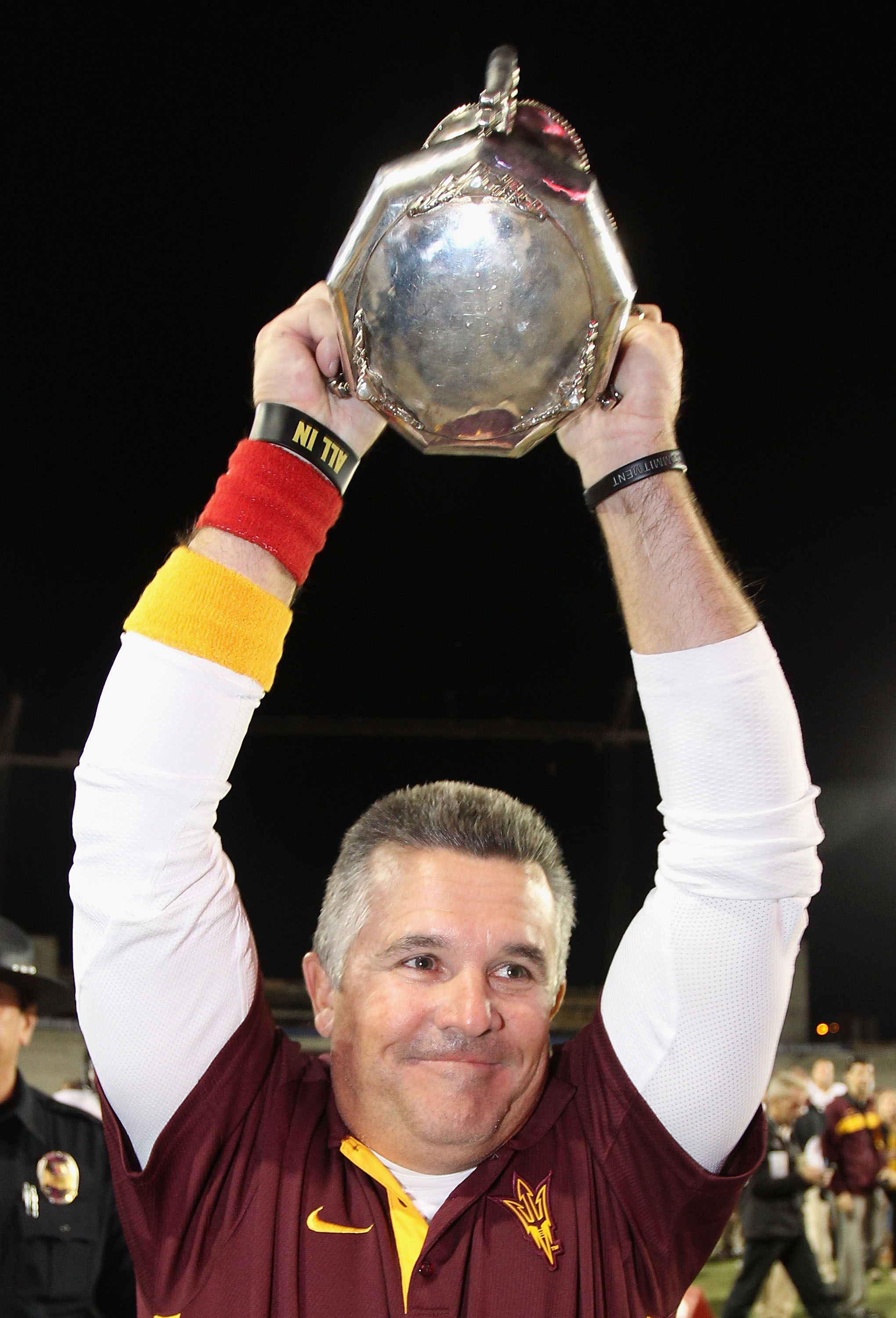 Eight minutes after staring a second consecutive Territorial Cup defeat in the face, Graham and company could be found hoisting the oldest trophy in college football while a passerby could hear a pin drop in the city of Tucson.

"We hold everybody accountable. We don't let anybody slack," Darby said. "We know at the end of the day we're going to go to the locker room, we'll laugh, joke around, and have fun, but on this field, we all have the same goal in mind and we have to push each other and work hard."

When the Sun Devils had their hearts broken in 2011, accountability was a serious concern.

In 2011, Erickson's final season as head coach, Arizona State ranked dead last among all FBS teams in penalties per game with 8.00 and penalty yards per-game with 79.77.

The Sun Devils' lack of control reflected poorly on the program, and an eight-penalty game and fourth quarter implosion against the Wildcats was the final straw of the Erickson era.

Less than a month after the Territorial Cup loss, Arizona State announced the hiring of Todd Graham to restore the once-proud reputation of Sun Devil football.

The Texas native came to Arizona State as a renowned defensive whiz, and he knew exactly how he wanted to rebuild the foundation of the Arizona State football program.

"He strains us, but we appreciate that because we know he cares."

Though the transition meant players would be taxed both physically and mentally on a daily basis, Darby believes Graham's principles give his team a better chance to succeed.

"It's 10 times faster, 10 times better," Darby said. "Guys know what to expect, guys believe a lot more. We believe in Coach Graham's vision and what it has in store for us."

In Graham's first season at the helm, the shifts in the style and quality of play for Arizona State were seismic. Though Arizona State finished just 8-5 overall, four of the five losses came against ranked opponents and the Sun Devils' young defense grew into a force to be reckoned with.

Last season, the maroon and gold led the nation with nine tackles-for-loss per game and finished second nationally with four sacks per game. While the Sun Devils have electrifying playmakers, guys like Will Sutton made the leap from starter to All-American because of Graham's emphasis on intense practices.

Initially, linebacker Grandville Taylor couldn't believe how closely Graham monitored defensive drills, but he's come to accept the fact that Graham and his staff truly believe that every rep counts.

"Coach Graham stays over with the defense and he keeps a strong hold on the defense," Taylor said. "He strains us, but we appreciate that because we know he cares." 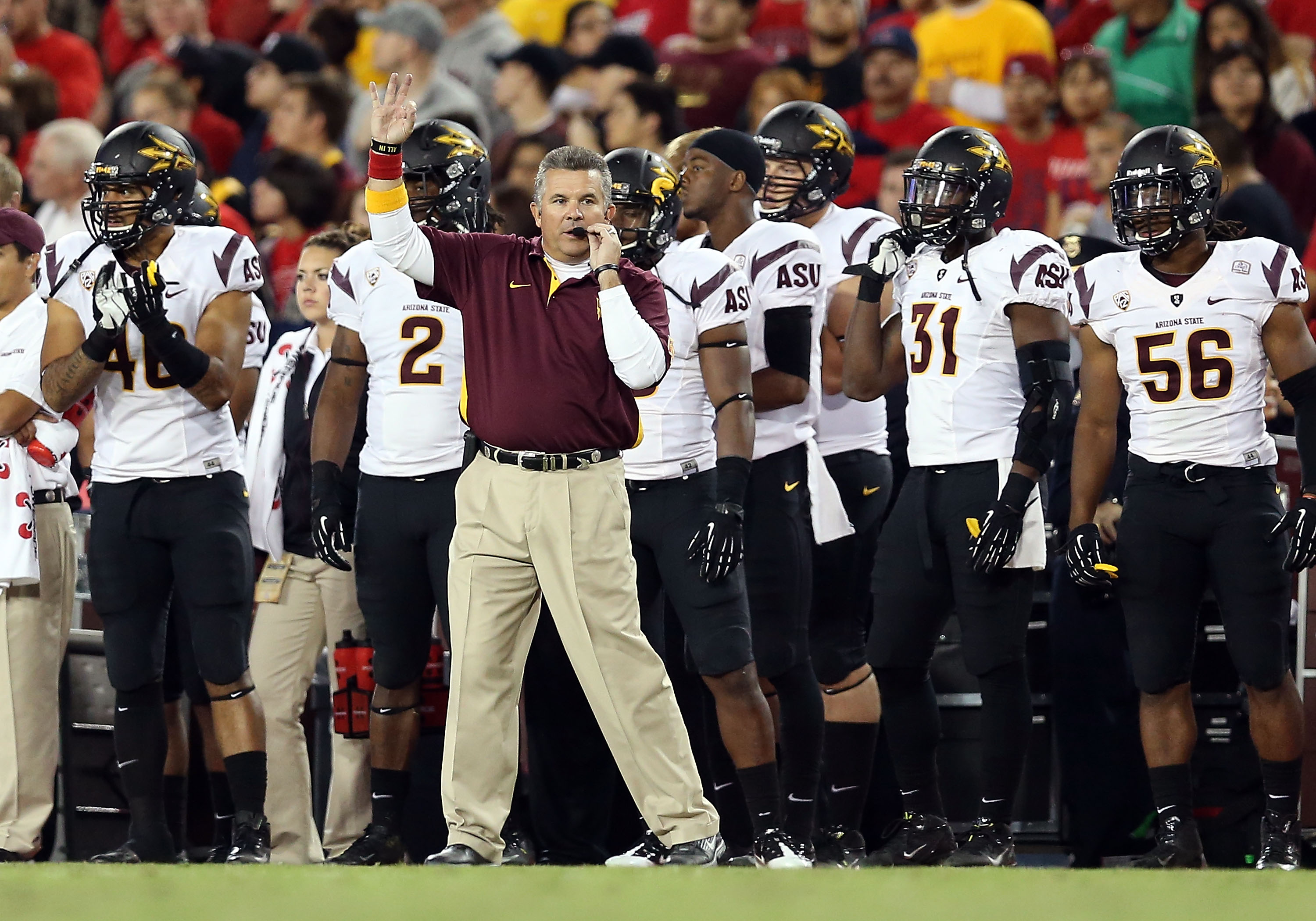 After a successful transition to Arizona State, Graham is now pledging to take his agenda further. Ultimately, on-field success should be a given; It's how his players conduct themselves off the field that Graham says he takes pride in.

"We talked about our one purpose that we have as a team and that's to be National Champions," Graham said. "That's in the classroom, on the field, off the field, everything we do."

For team leaders like Alden Darby, the new era of football at Arizona State is refreshing.

The vocal leader of the defense says his teammates know their coaching staff is molding them into great players, but he wants them to understand that Graham and company also want them to be all-around role models.

One of the ways that Graham has incorporated his mission is through drawing on a proud Arizona State tradition: the legacy of Pat Tillman.

Tillman's service and sacrifice helped develop the character of Sun Devil football, and Graham wants his players to embody the sense of honor and sense of duty for which Tillman stood.

Last fall, Graham built upon the Pat Tillman tradition by allowing players to don a camouflaged No. 42 jersey to practice if they earn the right to wear it by representing Tillman's ideals. Darby was the only player to wear the jersey last season.

Todd Graham wants his players to embody the sense of honor and duty that Pat Tillman stood for.

The honor of wearing the No. 42 has continued this spring, with defensive tackle Will Sutton, cornerback Osahon Irabor and SPUR backer Chris Young joining Darby by wearing the jersey.

As the spring concludes, the Sun Devils have their eyes set on making a Rose Bowl run. The team believes in Graham's vision that their highest goals are attainable, and that's because he believes in his players.

One of the best examples of the mutual trust among players and coaches is the relationship that Graham has built with Taylor.

The former walk-on earned an academic scholarship from Graham prior to last season, and now the rising senior has been granted an opportunity to earn a starting job.

"Coach Graham gave me an opportunity that Coach Erickson didn't," Taylor said. "Not to doubt [Erickson], but Coach Graham is a great guy and I'm just learning a lot from him and this whole coaching staff."

The belief, trust and discipline have all inspired current players to achieve to the best of their abilities, but it's also paying off for the future. 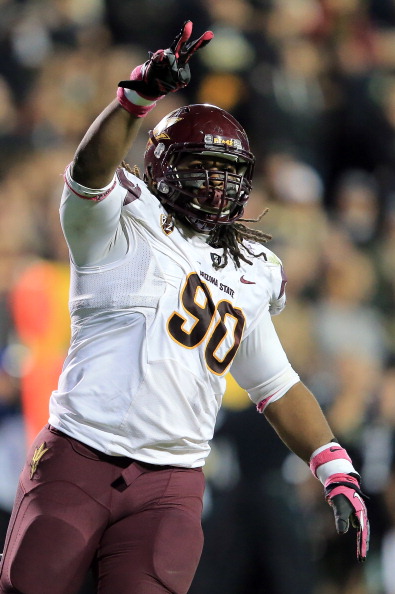 Not surprisingly, Graham targeted and landed a handful of highly sought after defensive recruits including local product Chans Cox.

The Blue Ridge High School linebacker was the No. 3 recruit in the state of Arizona, and his decision to stay and play at home almost didn't come to fruition.

Cox admitted that he didn't consider Arizona State until Graham arrived largely because the program lacked discipline and the foundation in place to get him to the next level.

"Coach Graham can't explain enough that this is a defensive team and the standards he has for the defense are really high," Cox said. "I'm really excited to be a part of it."

Graham and his staff have focused on developing relationships between recruits and their future position coaches, and defensive coordinator and linebackers coach Paul Randolph also played a big role in Cox's signing.

"I really love the coaches," Cox said. "Coach Graham and Coach Randolph, especially Coach Randolph being the linebackers coach now. The relationship I have with them is huge for me."

When Graham came to Arizona State, he decided to reconstruct the reputation of the program by focusing on the defensive side of the ball. In Graham's first season, the defensive statistics speak for themselves.

Aside from the dominant sacks and tackles for loss numbers, the Sun Devils led the Pac-12 in penalties and penalty yards per-game by a healthy margin and finished top 10 nationally in both categories.

The total reversal in penalty statistics displayed a newfound motivation in the Sun Devils, but so did other impressive marks.

There's no question the preparation Graham and his staff put into developing schemes and game plans has taken the defense to a new level, but he has also done a marvelous job at making his players realize that there's more to college than just football.

Throughout the offseason and spring, Graham has not relented in his quest to make Arizona State a model program. Now that his players have proven they can take care of business on the field, he expects the most from them away from it as well.

"They're demanding a lot more," Will Sutton said of his coaches. "The standard, the bar is set a lot higher than it was last year. Not just for me but for everybody."

The transformation has helped turn Arizona State into one of the nation's premier destinations for players with higher aspirations, especially those who play defense.

Bradford, Sutton, Darby, and many other Sun Devils can now envision themselves thriving at the next level, and they attribute much of this to Graham and his staff for demanding their best efforts.

"The bar is set a lot higher than it was last year."

"It's run like an NFL program," Darby said. "If you've got guys that want to do what they want, they're going to be held accountable just like the NFL."

As the Sun Devils turn their attention toward the 2013 season, they can look back with pride at the changes they've helped make.

In his short time at Arizona State, Todd Graham has taught his players how to "speak victory."

But this season, simply speaking victory won't be enough. The Sun Devils will have to eat, breathe, live and earn the victories that have come to be expected.

Though it's only spring, every Sun Devil knows the one word that doesn't have a place in Graham's program, and that's losing. 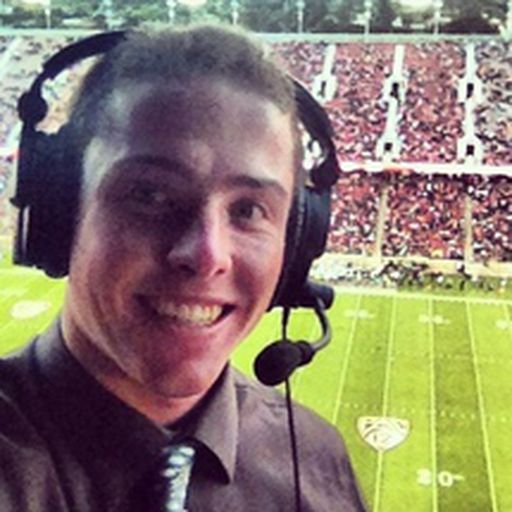 Kerry Crowley is a native San Franciscan working on a combined bachelor's and master's degree in journalism at the Walter Cronkite School of Journalism and Mass Communication at Arizona State University. Kerry covers a variety of sports for House of Sparky, but his true passion is football. He is also a play-by-play commentator and is pursuing a career in live television and radio.