With the 2014 NFL Draft beginning on Thursday, we take a look at how Arizona State's players have fared over the last few decades.

Click on the image to expand this tremendously great source of detail from our own Cody Ulm. 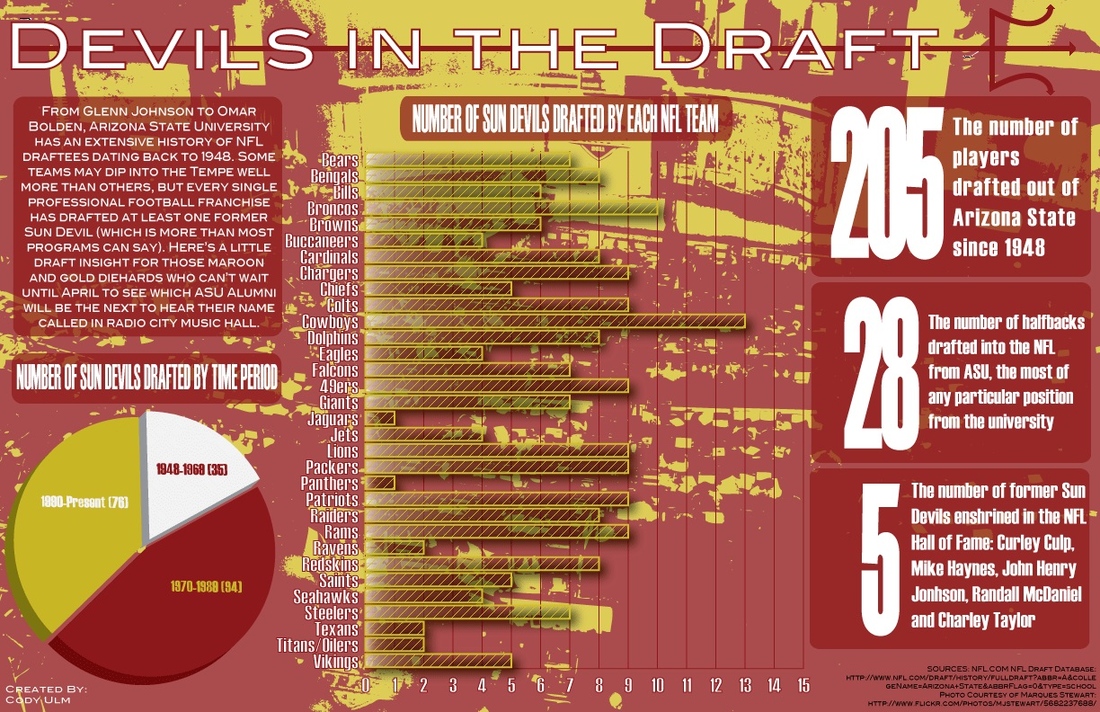 No team has taken more former Sun Devils than the Dallas Cowboys, who have taken 13. Their first pick was in 1969 with their 9th round (152nd overall) selection of Rick Shaw, and the most recent was 1996's 7th round (243rd overall) pick of Ryan Wood.

Norris Steverson Starts It All

The running back became the school's first ever NFL draftee, being taken by the Chicago Bears in 1934.

The total number of NFL touchdowns scored by former Arizona State players, which is the 11th most among any school in history. Charley Taylor leads the charge for former Sun Devils with 90 touchdowns in his Hall of Fame career. By comparison, the UofA has tallied just 307, ranking 70th.

No position has been drafted more than running back, with 28 ASU halfbacks and two fullbacks being taken in the NFL Draft. This edges out the 27 defensive backs and 24 linebackers thus far selected.

Combined rushing yardage of those running backs to date. The top ASU rushers in NFL history are Gerald Riggs (8,188), John Henry Johnson (6,803) and Leonard Russell (3,973). Though not a running back, quarterback Brock Osweiler is ASU's all-time worst NFL rusher, with -11 yards in two seasons.

* Defensive end Trace Armstrong spent four seasons at ASU from 1984-1987 before transferring to Florida. He went on to be the 12th overall pick by the Bears in the 1989 NFL Draft.

The years in which multiple Sun Devils were taken in the first round. In 2001, Adam Archuleta (20th) and Todd Heap (31st) were taken. ASU went back-to-back in 1988, with Randall McDaniel's selection by Minnesota (19th) being immediately followed by the Rams taking wide receiver Aaron Cox. The first pair went in 1976, with Hall of Famer Mike Haynes (5th) later being joined by Larry Gordon (17th).

There have been 14 ASU players drafted who have earned at least one Pro Bowl trip. Hall of Famer Randall McDaniel leads the way with 12 such honors. Altogether, the 14 players have totaled 55 Pro Bowl trips.

Nine Sun Devils were drafted that year, the most of any year. It was bookended by a pair of defensive linemen, beginning with Jim Jeffcoat's selection by Dallas at 23rd overall and ending with Walt Bowyer to Denver in the 10th round (254th overall). In 1969, 1973, 1974 and 1997, eight Sun Devils were drafted.

The combined passing yardage and passing touchdowns of ASU quarterbacks drafted. Jake Plummer leads in both categories with 29,253 and 161, followed by Danny White with 21,959 and 155.

Just one Arizona State kicker has been drafted: Jim McCann by San Francisco in 1971 (8th round, 205th overall), making it the least drafted position in ASU history. Not surprisingly, only two punters have been taken: Mike Black went to Detroit in the 7th round of 1983's draft, and two years later, Jim Meyer went to the New York Giants with their 12th round pick.

The longest streak in which Sun Devils were taken in the first round. It began in 1978 with John Jefferson (14th, San Diego), then Al Harris (9th, Chicago) in 1979, and then ASU's only first round quarterback, Mark Malone, being taken by Pittsburgh.

No Need To Pack

The last season without an Arizona State player selected. The prior goose egge was in 1963. There were some close calls. The 1962 NFL Draft had quarterback Joe Zuger last until the 18th round, and there was just one late selection occurring in both 1989 (Scott Kirby, 9th round, Green Bay) and 1990 (Lynn James, 5th round, Cincinnati) to keep the streak alive.

No player has lasted longer to be selected than defensive end Chris Lorenzen, who was the 438th player selected in the 16th round of the 1976 NFL Draft by the Cleveland Browns. Incredibly, there was still a round to go that year, as a total of 487 players were taken in 17 rounds. In terms of round, three Sun Devils have gone in the 27th round: Clancy Osborne (Rams, 1957), Marvin Wahlin (Bears, 1953) and Duane Morrison (Giants 1952). No Sun Devil has earned the "honor" of being "Mr. Irrelevant", a title given to the last player selected in the draft each year.