The speedy sophomore looks to provide the team with a sorely needed threat at wide receiver.

The stage was much bigger, but the results carried over.

Last August, while running onto the major college football stage for the very first time, true freshman wide receiver Rick Smith kept his thoughts squarely on his job: Make no errors, have confidence in his ability, and help his new team win.

A highly productive prep star at Long Beach Poly, Smith wasted little time in making his presence felt in Tempe. He hauled in a 16-yard pass on the game's fifth play, and on Arizona State's second drive, he had two carries for 23 yards. But the real "welcome to college football" moment came late in the third quarter of a blowout win.

With ASU up 42-6, Smith scored his first collegiate touchdown, a seven-yard catch-and-run that also marked quarterback Taylor Kelly's first career touchdown pass. The moment was made all the more special for Smith because of who had a front row seat for it.

"I just want the best, not just for me but for the team to help us win games."

"I was tremendously happy, because my family was there," said Smith "They were right there in the corner when I scored, so I was looking for them. I saw them smiling, so I was really happy"

Smith led the team with five receptions in the season opener, but would not catch another pass until five games later, when he tallied four—including another touchdown—against Colorado. Three more catches came the next week at Oregon, but Smith would only grab two more balls over the season's final six games.

Looking back on his freshman season, Smith feels that he learned two key lessons.

"I should have been more physical, because I have a smaller body frame, and just knowing the concepts and the coverages a lot better."

Heading into the 2013 season, Smith has often been cited as the player most likely to help reinvigorate the Sun Devil receiving corps. Last season, the group greatly underperformed, and the two most productive players—Rashad Ross and Jamal Miles—have each graduated.

Among the key returners are Smith and two seniors, Kevin Ozier and Alonzo Agwuenu. The speedy Smith, the sure-handed Ozier, and the big bodied Agwuenu all possess varied skillsets, which Smith sees as complementary assets.

"We can be better, but what are we willing to do extra as a group, and not individually? By us all working, we all have different aspects to the game. We'll all just vibe off each other and keep competing."

Beyond production, the loss of Ross and Miles also left a glaring hole in the group's leadership. However, Smith feels that two players are ready to step up and help the younger members of the corps.

With the perceived weakness at the position, the team signed five wide receivers as part of their 2013 recruiting class, with each player arriving on campus this August. With dangerous weapons in the backfield and at tight end, Smith feels that the wide receiver group can succeed collectively, rather than rely on a go-to target.

"I don't feel like we need a top No. 1 receiver to succeed," said Smith. "We have a lot of receivers here, and some will come in to help us out. We can succeed with what we have now." 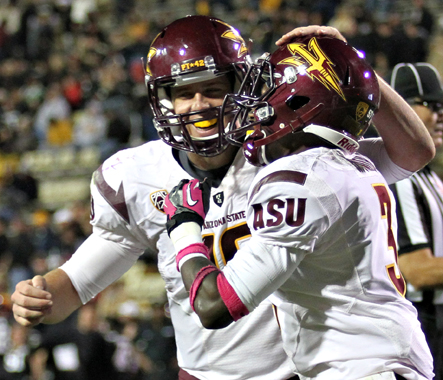 With many wide receivers battling for playing time, there is one constant—quarterback Taylor Kelly. In his first year as a starter, he surprised everyone by throwing for 3,039 yards and 29 touchdowns, all without a reliable threat on the outside. Smith feels that with a year in the system and continuing to get to know his receivers, Kelly will be looking for the group a lot more this season.

"He has a lot of chemistry, because he has worked a lot, said Smith. "To this day, we have worked all offseason. We'll work out at night, catching balls and such. I feel he is a lot more comfortable with us on the perimeter. Hopefully, we'll see how that contributes in the fall."

Smith has been one of the team's stars so far this spring, and continued that success on Tuesday with a great practice session that included two dazzling touchdown receptions. Being a reliable target has been one of his fundamental goals during spring football.

"I try to go every day without dropping any balls that are thrown to me," said Smith. "I just look to that every day. One of the main goals I have is to not have a coach tell me I did anything wrong. My goal is not to be perfect, but to do the best I can do to make them happy. Let them know I can be a good guy and that they can count on me this year."

After playing primarily at the Z, or slot, wide receiver spot last year, Smith expects to see a larger role on the outside in 2013. While his 5-foot-9, 165-pound frame may not appear to be tailor-made for an outside spot, his speed is certainly ready, being timed in the 4.5 range. But regardless of where he lines up, Smith has just one thing on his mind.

"I just want the best, not just for me but for the team to help us win games. I just want to contribute as much as I can."

Smith has yet to look forward to any goals for the upcoming year, preferring to take each workout and practice one day at a time. But ultimately, Smith sees his 2013 season in very simple terms.

"Catch every ball that is thrown to me and help us win."