The Arizona State men's gymnastics team had the experience of a lifetime this summer. And after beating teams from England, Zimbabwe and South Africa, the Sun Devils have put the rest of the world on notice.

They said the kids smiled. Congregating outside of their mud and straw huts in the Valley of a Thousand Hills in South Africa, the Zulu tribe children learned basic acrobatics - with pitchfork emblems pinned to their garments. The Arizona State University men's gymnastics club smiled back.

"It was just cultural, you know?" said Head Coach Scott Barclay, who is in his 34th season with the team. "The kids were just loving it, and it just changed the team's perspective on ‘Oh, these kids got nothing but their hut and a dirt floor.'"

ASU men's gymnastics enters its 21st season as a club team with another international notch in its belt (Mexico and Guatemala before). The team travelled to South Africa in mid-July after doubling its fundraising efforts last season.

"We didn't go over there just to compete," said Barclay, who admitted winning the 2013 National Championship in South Africa was not the main objective. "That wasn't my goal. It was part of it, but it really was an educational trip to see the rest of the world, partake in it, and hopefully make a difference and leave a footprint over there in a positive way. Mykey will tell you."

Mychael Ramirez, a five-year returning gymnast for the team, begins to grin - clinching the parallel bars as he spoke.

"Handing those pins out and seeing them run to their huts down these dirt roads is something I'm never going to forget," Ramirez said. "They were so happy, just straight-jubilation."

Head Coach Scott Barclay said the three-hour clinic in South Africa gave his team a different perspective on life outside of the sport of gymnastics.

"So all of us cram into this shuttle bus, and we go onto this dirt road and see all of the houses - mud and straw huts with aluminum roofing," he recalled. "The roofing was just held together by rocks so it wouldn't blow away. That was it. Seeing that was definitely an eye-opener of ‘Oh my god, I'm in a third-world country right now.'"

Ramirez said this is why the team - primarily the 15 gymnasts who travelled overseas - will have an advantage going into the season. Barclay said the three-hour clinic gave his team a different perspective on life outside of the sport of gymnastics.

The National Championships in South Africa was the kicker; the Sun Devils beat teams from England, Zimbabwe and South Africa to claim gold. Barclay said the four-day event (two, six-hour training days and two competition days) was an opportunity for the American gymnasts to bridge not only the cultural gap, but learn moves from other countries.

"It was a neat exchange of languages," Barclay said. "Even though they spoke English, it was that language of sport that really drew them all together. It clicked with them and it made it all worthwhile."

Barclay said the team pulled through in the competition, even when it competed less than 24-hours after landing in the continent. Captain Stewart MacDonald agreed. 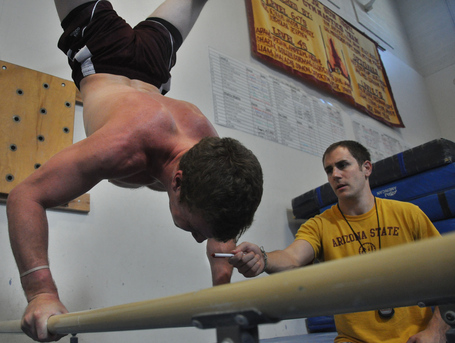 "It was still one of the best meets of my life," he said. "Well, personally not competing-wise but just being there. I had one of the worst routines of my life - I fell three times on high-bar. But, I think we look a lot better than we have in the past four years that I have been on the team."

From helping tribes to winning titles - and not to forget being less than 50-feet away from a wild leopard - the team is back in Aspire Kids Sports Center in Chandler, Ariz. Barclay bought the gym in 1995 to reestablish the men's team; the gym officially opened in 2005.

Barclay said he attributes the team's success - 16 national championship team titles - to the feeder program. The championship run (nine consecutive titles) stems from the incoming freshman classes. Last year, the team acquired nine freshmen gymnasts; this year it tacks on five more. MacDonald said there is a lot of skill in the sophomore class, which will complement the seasoned gymnasts returning for a fifth time.

Lee Wilkerson is one of those gymnasts. Returning for a fifth season, the all-around performer said he does not even know what he's going to do this year; he's just going to "go with it."

Wilkerson "going with it" may have deeper meaning. Assistant Coach Evan Shaw said he is the team's strongest all-around gymnast and an anchor. This is why Shaw pushes Wilkerson in the strength tests.

Shaw counts the number of times Wilkerson successfully does handstand pushups. Wilkerson's chest needs to touch Shaw's pencil, which hangs low enough where the gymnast's arms have to meet a right angle to achieve the rep. He ends up getting eight reps.

"I don't pay these guys to be here, they don't get scholarships. They want to be here. It's fun to see it happen. They do it because they love it and develop a passion." -Coach Scott Barclay

"That's not bad," Shaw said, chuckling after Wilkerson shakes off the pain. "We want our baseline though to be at 10 (reps)."

This is the mentality the club has. Barclay said to beat NCAA teams - Air Force is always its main competition and has beat ASU the past two seasons - the team needs to start training early. The trip to South Africa removes the beginning learning stages of the offseason so gymnasts can focus on perfecting their routines.

Barclay said he also likes the club sport system because it caters to the sport. His reasoning: the body physically peaks at around 22 or 23 years-old. The NCAA gymnasts will have already become ineligible by then; for club sports, as long as the gymnast is enrolled in classes, he can compete.

Barclay looks over the gym he founded. 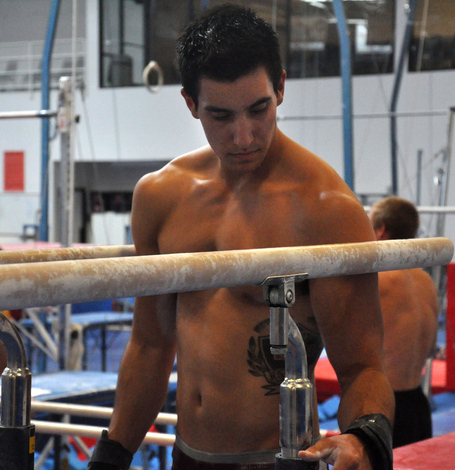 The coach said he understands his gymnasts are strapped for money and the program is unable to offer scholarships for their contributions. Some of the team has to hold down jobs to afford club dues and compete.

"And that's the best part. I don't pay these guys to be here, they don't get scholarships," he said. "They want to be here. It's fun to see it happen. They do it because they love it and develop a passion. I didn't even know if it was going to work for sure. You build it and they will come, and that's what happened."

The team will hold its scrimmage at the facility Dec. 13.

"I'm more excited," MacDonald said. "After that we'll see where we are. I think this is the year, and I think we'll tackle Air Force like we did Africa."

All photos used in this article are courtesy of Brendan Capria.