The Sun Devils leaked their socks and sleeves for the Notre Dame game and the gloves that Arizona State players will wear on Saturday were released on 3TV Sunday night.

Share All sharing options for: ASU piecing together uniform for Notre Dame game 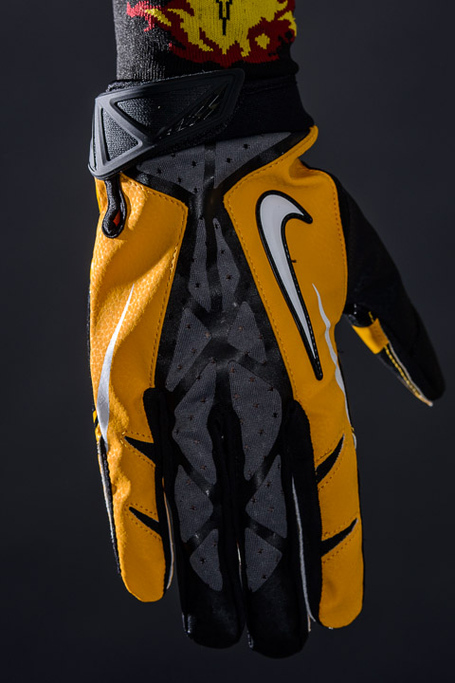 The gloves were the latest piece of the uniform to be leaked in what is turning out to be a gradual reveal. After Saturday night's win against USC, the Sun Devil athletics Twitter account released a photo of the socks that the Sun Devils will sport for the Notre Dame game.

Sunday morning, the official ASU football Twitter account tweeted out a picture of the sleeves that Nike created for the Arizona State players.

The gloves are the latest accessory that Nike dreamed up for the Sun Devils and it comes as a surprise that the company did not opt to include a graphic of Sparky or a pitchfork on the gloves.

The most interesting uniform detail has yet to be released as the Sun Devils plan on unveiling a new helmet for Saturday's game after Todd Graham's press conference on Monday. Arizona State debuted a new helmet style against USC as the Sun Devils opted for a large pitchfork on the right side of the helmet and player numbers on the left side.

Rumors are swirling about Arizona State putting flames on the helmets but we won't be able to confirm any design details until after 12:30 p.m. on Monday.

Even though Nike is rolling out new accessories for this game, the Sun Devils will likely wear their all-black uniforms that they trotted out for the Wisconsin game earlier this year. Fans traveling to Dallas for the game are encouraged to wear gold in support of their Sun Devils.

For up to date coverage on all the uniform leaks, check in with House of Sparky throughout the week.