The Sun Devils are going to be turning quite a few heads when they step on the field this Saturday.

If you think the Sun Devils shook things up with a new helmet design for the USC game, the lids they plan on wearing for the Notre Dame game are going to blow you away.

After Todd Graham's Monday press conference, the Arizona State athletic department displayed the new helmets that the Sun Devils will wear on Saturday for the media. 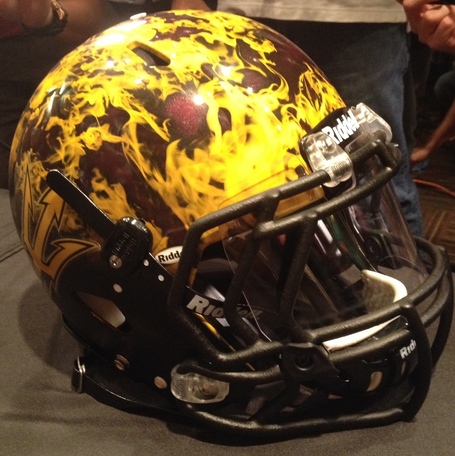 The helmets are based in maroon and have a flame pattern on top. Every flame pattern is different on each helmet. The helmet also features three pitchforks.

Here it is Sun Devil Nation! We're ready to take the field in these Saturday! Forks Up!! pic.twitter.com/v5365dbteU

The new headgear is the latest in a gradual reveal of uniform pieces for Saturday's "Shamrock Series" matchup against Notre Dame at AT&T Stadium in Dallas. 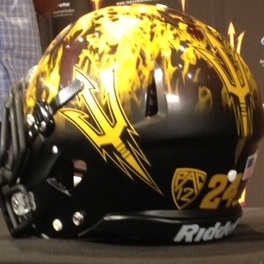 Screenshot of the helmets revealed in the video 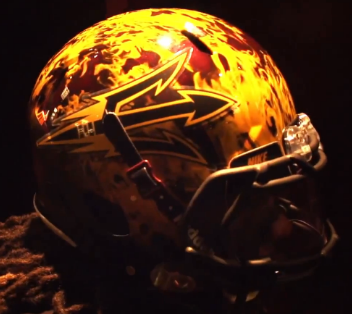 The Sun Devils showed off their new socks on Saturday night after defeating USC and released new sleeves that feature a pitchfork surrounded by flames on Sunday morning. Sunday night, Sparky joined the 3TV sports crew to leak the new gloves the Sun Devils will wear against Notre Dame. 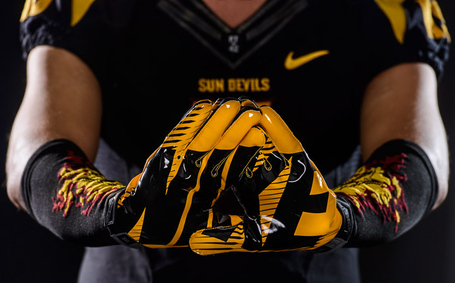 Even though the new accessories don't incorporate as much maroon and gold as traditional Arizona State fans prefer, the new designs have been well received. Fans seemed to enjoy the sleeves much more than the gloves, citing them as a blatant advertisement for Nike.

The Arizona State athletic department is urging fans to wear gold if they are traveling to the game in Dallas. The Sun Devils will wear black jerseys to counter Notre Dame's whites.

The helmet design is a great talking point, so let us know how you feel in the comments section of this article.

More from House of Sparky: