For the 14th time since 2000, the Arizona State Sun Devils will begin their summer in the college baseball postseason. The only time the Sun Devils did not make the tournament was in 2012, when they were ineligible because of off-the-field matters.

Before the Sun Devils take the diamond, here is your Cal Poly regional preview.

The Sun Devils finished third in the Pac-12 in 2014, and come into postseason play 9-1 in their last 10 games. Arizona State has four regulars in their starting lineup that hit over.300 along with a deep bullpen in front of closer Ryan Burr.

The starting rotation is led by a pair of lefties. Brett Lilek (4-4, 2.59 ERA) and Ryan Kellogg (8-3, 3.84 ERA). Darin Gillies has been very inconsistent as the Sunday starter and the Sun Devils turn to freshman RHP Seth Martinez (5-0, 4.53) for midweek games.

Arizona State does not boast much power in their lineup, but are a scrappy team that puts together good at-bats.

Pepperdine won both the regular season and the WCC tournament. The Waves are led by a talented group of underclassmen such as freshman catcher Aaron Barnett (.378, 0 HR, 27 RBI) and sophomore infielder Brad Anderson (.307, 5 HR, 41 RBI).

However, their best player is junior outfielder/pitcher Aaron Brown. A top draft prospect, Brown hit .320 with 12 home runs and 45 RBI's, while also going 11-1 on the mound with a 2.24 ERA.

The Hornets are making their first NCAA tournament appearance in school history after winning the WAC tournament. Sacramento State is led by Ryhs Hoskins with his 12 home runs and 53 runs batted in. On the mound, the Hornets are led by junior righthander Brennan Lietao (9-4, 2.21 ERA) and closer Sutton McLoughin (1.85 ERA, 9 SV).

Sacramento State does have a victory over the No. 1 overall seed in the tournament., Oregon State, and two wins over Utah this season.

OF Nick Torres: The junior leads the Mustangs with 47 RBI's and was named to the first team All-Big West team this year.

LHP Matt Imhof: The junior lefthander has fanned 120 batters in 91 innings pitched. He has only allowed 62 hits this season and opposing batters are hitting a meager .201 against him.

2B Mark Mathias: The Big West Player of the Year started 51 games for the Mustangs this season, the sophomore hit .378, tallied 11 steals and scored 36 runs this season. He makes the Mustangs go on offense.

RHP Ryan Burr: The sophomore closer has struggled with command issues this season (37 BB in 43 IP) but has some of the best stuff of any pitcher in the country including a fastball that can reach the high 90's and a devastating slider.

LHP Brett Lilek: The sophomore southpaw can reach 94 on the radar gun and is a key cog in the Arizona State rotation. Lilek has only allowed 58 hits in 83 innings pitched.

SS Drew Stankiewicz: The sophomore leads Arizona State regulars with a .337 batting average. Stankiewicz plays solid defense up the middle and has a .436 on-base percentage.

C Aaron Barnett: The Pepperdine catcher leads the Waves with a .378 average as a freshman. Barnett has 76 hits and just nine strikeouts in 201 at-bats.

LHP/OF Aaron Brown: Brown is a semifinalist for the Golden Spikes Award, amateur baseball's top honor. He is one of the best two-way players in the nation, hitting 12 home runs at the plate and starting 15 games on the mound.

1B Rhys Hoskins: The WAC Player of the Year leads the Hornets in home runs and runs batted in.

RHP Brennan Leitao: The junior leads the Hornets with 110 innings pitched. Leitao has a 2.21 ERA and only walked 22 batters this season.

OF Nathan Lukes: The sophomore posted 89 hits and hit .357 this season. Lukes has a .437 on-base percentage and 10 steals on the season. 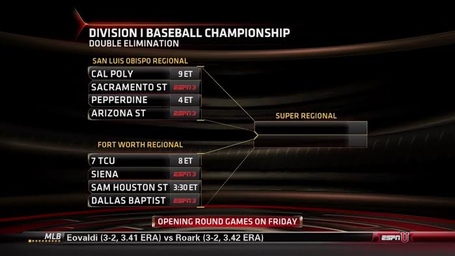