The outside linebacker from Temecula California, pulled the trigger on committed to Arizona State Wednesday afternoon.

If you buy something from an SB Nation link, Vox Media may earn a commission. See our ethics statement.

The Arizona State Sun Devils have picked up their eighth commitment for the class of 2015 as outside linebacker Malik Lawal has pledged to the Sun Devils according to his twitter.

The 6-foot-1, 225-pound Lawal held offers from California, San Jose State, Utah, Utah State and Washington State. He has also visited both UCLA and USC, despite not having official scholarship offers from those programs. Arizona and Stanford also had interest in the prospect according to reports.

Lawal is recovering from a torn ACL he suffered a few months ago, after his surgery, the Arizona State coaching staff sent him the picture below on Twitter that earned major points with Lawal and his coach. 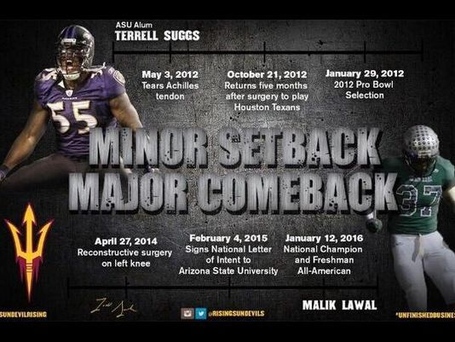 Once again, all commitments made by recruits at this stage are strictly verbal and none binding until the prospect signs on the dotted line in February.