ASU moment of the year round of 16: No. 2 basketball beats U of A vs. No. 15 Will Sutton interception at Utah

It's day two of the moment of the year tournament. Who advances and who goes home?

Share All sharing options for: ASU moment of the year round of 16: No. 2 basketball beats U of A vs. No. 15 Will Sutton interception at Utah

Yesterday No. 1 seed football winning the Pac-12 south (92 percent) took down No. 16 water polo making the NCAA tournament for the first time (8 percent) in convincing fashion.

Here is what the bracket looks like after one day of action: 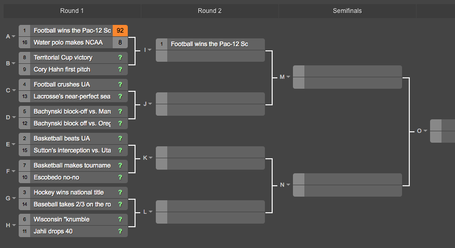 Today our matchup is perhaps a little more intriguing.

It is no surprise that the biggest victory in the Herb Sendek era makes it on our list of the best moments from this past athletic season. What makes it a little sweeter is that the victory came against arch rival Arizona.

Seed No. 15: Will Sutton interception at Utah

Last year's game in Salt Lake City against the Utah Utes was an offensive struggle for the No. 23 Sun Devils but Will Sutton's interception near the end of the game helped Arizona State escape with the win.

With 5:19 remaining in the third quarter, Utes quarterback Travis Wilson threw a 12-yard touchdown pass to Sean Fitzgerald to put the Utes up 19-7. The Sun Devils crawled back into the game in the fourth quarter capped off by a 14-yard touchdown pass from Taylor Kelly to Richard Smith to put Arizona State up 20-19.

Utah got the ball back twice in those final two minutes. With 1:08 left in the fourth quarter, the Utes had the ball on their own 29-yard line and needed roughly 50 yards to gain in order to set up what would have been the game winning field goal.

Sutton had other plans.

Wilson lined up in the shotgun and didn't see Sutton who reached up to grab the interception and give Arizona State the win to keep the Sun Devils on top of the Pac-12 South. A win the following week over Oregon State set up the de-facto Pac-12 South title game at UCLA which the maroon and gold went on to win in thrilling fashion.