ASU moment of the year round of 16: No. 3 hockey wins title vs. No. 14 baseball upsets Oregon State

Hockey won the program's first national championship, and baseball went into Corvallis and turned its season around. Which was better?

Share All sharing options for: ASU moment of the year round of 16: No. 3 hockey wins title vs. No. 14 baseball upsets Oregon State

Here are the results from yesterday's vote. Basketball beating Arizona (73%) took down Will Sutton's interception at Utah (27%).

Here is the bracket as it stands right now: 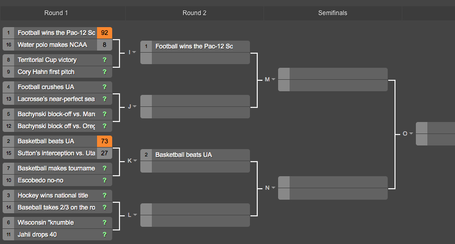 Seed No. 14: Baseball takes two of three from No. 4 Oregon State

It had been a rough season for Arizona State baseball before its trip to Corvallis, Oregon. The Sun Devils were treading water at 10-9 on the season, but had to pick up a big-time win. It seemed like they were set to drop under .500 when they visited the No. 4 Beavers, but it didn't quite turn out that way.

The Sun Devils dropped the first game of the series, and were one out away from a 10-11 record in the ninth inning, before everything turned around. Outfielder Jake Peevyhouse doubled with no one out in the frame, then scored on a single by third baseman Dalton DiNatale to send the game to extras.

Sophomore Johnny Sewald singled in the 10th, advanced to second on a bunt then scored on a double by catcher RJ Ybarra. Closer Ryan Burr slammed the door in the bottom half of the inning to complete the comeback and a 3-2 victory.

Sunday afternoon Arizona State did not need the late-inning comeback. It had a 4-3 lead in the eighth inning, and Burr was called upon to make sure it stayed that way. It did, and the Sun Devils added three runs to take a 7-3 lead and a series victory.

A series win is exactly what the Sun Devils needed. After their loss to the Beavers on the opening game of the series, they went 23-12 the rest of the season. It turned the season around, and helped catapult them to their 14th NCAA tournament appearance since 2000.

Voting is now over in this matchup. Hockey (98%) demolishes baseball (2%).