ASU moment of the year round of 16: No. 4 football beating U of A vs. No. 13 lacrosse near perfect season.

Can a season take down one game or will sport prominence win the day?

Share All sharing options for: ASU moment of the year round of 16: No. 4 football beating U of A vs. No. 13 lacrosse near perfect season.

Here is the bracket as it stands right now: 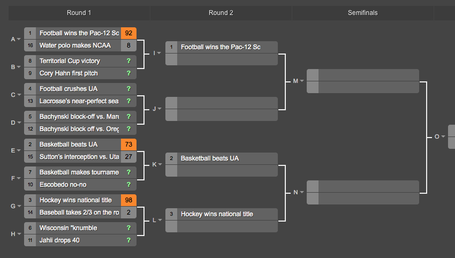 No. 4 seed football beats U of A

No. 13 seed: Lacrosse near perfect season:

For years now, the Arizona State lacrosse team has been a powerhouse in the Men's Collegiate Lacrosse Association (MCLA).

However, what the lacrosse team did in 2014 was unprecedented. The Sun Devils finished the regular season with a perfect 14-0 record.

They then swept through the Southwestern Lacrosse Conference Tournament and received the No. 1 overall seed going into the MCLA tournament.

With nine seniors on the team, and head coach Chris Malone announcing that he would be taking another job at the end of the season, everything was set in place for them to cap off their careers as champions.

In the first round of the tournament, Arizona State blew out Indiana 18-5. The following round was more difficult, but they found a way to outlast Boston College and win 8-7. This crucial win gave the Sun Devils their fifth consecutive appearance in the final four.

The Sun Devils faced off against SLC rival Chapman in the semi finals. It was the third meeting between both teams during the season. And for the third time, Arizona State was victorious as they won 10-5.

Arizona State won the first match up between both teams in the regular season 8-6. However, Colorado would end up getting the upper hand in the finals as they were able to narrowly hold on to a 13-12 win.

Despite not being able to win the national title, it was still without a doubt the best season in school history.