Which block was betterASU m 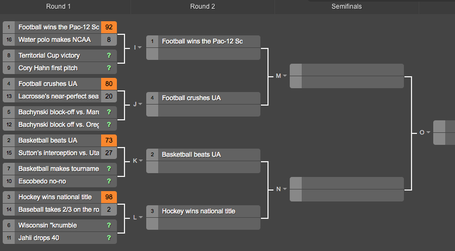 Today it's a battle of the "walk-off" blocks.

The Golden Eagles were ranked No. 25 in the country at the time and were the Sun Devils first true test of the young season, the win solidified what was seen at the time as a potential NCAA tournament team. Bachynski, who stained his No. 13 jersey with blood earlier in the game, put on what he said was the only number available on the bench No. 42.

A defensive play to seal a win for Arizona State wearing the No. 42. It's hard to write a movie script better than that. Bachynski had a double-double 14 points and 12 rebounds on top of his high-reaching moment. It was the Canadian's sixth straight game with a double-double at the time, Bachynski went on to break his own single-season Pac-12 record for blocks that he set in his junior year.

Oregon's Joseph Young scored 29 points in the second half to almost complete a comeback in a game where the Ducks trailed 50-29 with 14:30 remaining in the contest. Jordan Bachynski's palm didn't let that number reach 31.

The Ducks set up a beautiful play as Young made a back door cut along the baseline but Bachynski rotated over and blocked the would be game tying shot to give the Sun Devils the 74-72 win.

Arizona State improved to 18-6 overall and 7-4 in the Pac-12 at the time. The Canadian almost had a triple-double in the game with 26 points, nine rebounds and nine blocks.

Alongside Bachynski's moment, there was controversy off the court during the game. Oregon's Jason Calliste was injured and went to the baseline closest to the Arizona State student section to try and walk off the injury. Calliste got into a verbal confrontation with a student that might have turned physical if security hadn't intervened.

Oregon head coach Dana Altman alleged after the game that Arizona State fans spit on the Ducks' coaching staff but according to a report by The Oregonian, Altman's staff decided not to press charges.

Not only was it a memorable game on and off the court but it gave the Sun Devils a lot of momentum headed into its home game with the No. 2 Arizona Wildcats which the Sun Devils went on to win.