One of the oddest moments of the year against one of the best individual performances.

No. 12 seed Bachynski "walk-off" block against Oregon was voted as better than his game-winner against Marquette on Friday. 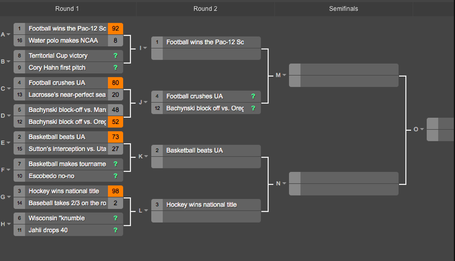 Today features one of the oddest moments of the year against one of the best individual performances.

Seed No. 6: The "knumble" against Wisconsin

It was one of the most controversial finishes to any college football game in recent memory and it will go down in Arizona State football lore as one of the craziest and absurd finishes of any game in the history of Sun Devil Stadium.

It has affectionately been termed "the knumble."

18 seconds remained on the clock in the fourth quarter. Wisconsin quarterback Joel Stave hiked the football, ran to the middle of the field and what happened next can simply be described as chaos on the football field.

The night of the game we wrote an article trying to explain everything and who might be to blame. Multiple fans in the stands who we've spoken to since that night said they were simply looking around unsure of what was happening and before they knew it the game was over.

Regardless of what happened, the way it all unfolded and the controversy surrounding the entire incident will not soon be forgotten.

The Sun Devils knew it wouldn't be easy going into the Thomas & Mack Center to play against Bryce Dejean-Jones, Roscoe Smith and the rest of the Runnin' Rebels. It was expected to be the first road test for the maroon and gold last season and it didn't start out well. Arizona State went into halftime down 38-34.

Carson came out in the second half and willed the Sun Devils to an 86-80 victory with 26 points in the second half. The Mesa High School product also had seven assists and twice as many points as Jermaine Marshall, who had 20 as the the second leading scorer in the game that night.

The win advanced Arizona State to a 4-0 record. Carson became the fifth Sun Devil to score 40 points in a game and the first Sun since James Harden, who put up a 40-spot on UTEP on Nov. 30, 2008.