ASU Moment of the Year round of 16: No. 7 Basketball goes dancing vs. No. 10 Dallas Escobedo's no-hitter

Basketball made the tournament for the first time since 2009, but was it better than a no-hitter and a walk-of on the same night?

Share All sharing options for: ASU Moment of the Year round of 16: No. 7 Basketball goes dancing vs. No. 10 Dallas Escobedo's no-hitter

The sixth-seeded Wisconsin "knumble" took down the No. 11 seeded Jahii Carson 40-point game on Saturday. 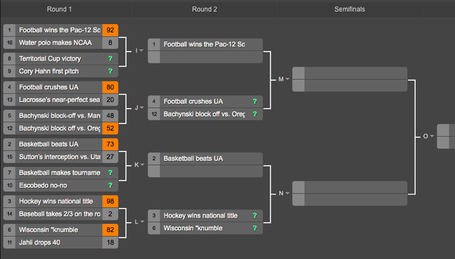 Today showcases a huge moment for the University against an individual performance completed by as an exciting end as there is in softball.

Arizona State hadn't made an NCAA tournament since 2009 coming into last season. The Sun Devil faithful had endured a tough stretch of mediocre basketball until last season when it all came back together for the maroon and gold.

The story lines of each player were easy to root for as well. The local blistering fast superstar who had overcome adversity academically, the veteran looking for a new start out west, a 7-foot-2, 25-year-old four year letterman who had improved tremendously during his time in Tempe, a JUCO transfer who had experienced homelessness, a foreigner who had a roller coaster season but seemed to come through at all the right time, the local kid who battled his way into the starting lineup and the little engine that could who fought his way into the rotation because of his grit and toughness.

They all came from extremely different backgrounds but found enough chemistry on the basketball court to beat No. 25 Marquette, No. 2 Arizona and head into the NCAA tournament as a No. 10 seed to play Texas. The result wasn't what the Sun Devils wanted or expected even though they were the higher seed.

It remains to be seen how many draft picks the Sun Devils had on this squad, but it certainly won't be a team that will be forgotten any time soon.

Ever since Dallas Escobedo first brought a Women's College World Series title to Tempe during her freshman year in 2011, expectations have been exponentially higher for the program. Although the team only made the Super Regionals in Escobedo's senior campaign, one of the top highlights of the season was her no-hitter vs. Longwood on Mar. 5.

It also happened to be a very rare walk-off no-hitter for the Sun Devils. Escobedo had already faced her last batter in the top of the seventh inning but still wasn't sure if she had a "no-no" because the game was still tied at zero thanks to the almost equally impressive work of Lancer pitcher Elizabeth McCarthy.

In the bottom half of the seventh inning Bethany Kemp singled and then found herself at third base after a single by Elizabeth Caporuscio. Nikki Girard came to the plate and grounded a ball to the second baseman, who attempted to throw Kemp out at the plate but she avoided the tag and Escobedo had herself a no-hitter as well.

Escobedo walked three and hit one batter while striking out 13. It was the third no-hitter of her career.