ASU moment of the Year round of 16: No. 8 Territorial Cup vs. No. 9 Cory Hahn first pitch

It's a battle of "firsts" for the Sun Devils

Share All sharing options for: ASU moment of the Year round of 16: No. 8 Territorial Cup vs. No. 9 Cory Hahn first pitch 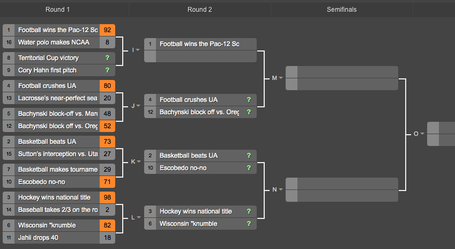 Now here is our final matchup in the round of 16.

The Territorial Cup Series began four years ago, and up until this season, it had been the exclusive property of the University of Arizona.

The Series encompasses all 20 NCAA Division I sports in which both sports compete. A point is granted to the school that wins the most head-to-head meetings in that sport, or in the case of sports like swim or track, whichever school finishes better at the Pac-12 championships. In the case of a sport like basketball, where the schools have two meetings, a half-point is awarded for each victory.

While football's Territorial Cup is the trophy that holds the history and prestige, the Series trophy is one both schools badly want. Arizona took the trophy in every year of existence. Arizona State clinched its first Series victory this year when golf finished three spots better than the Wildcats at the men's golf Pac-12 tournament on April 27.

Three years after a head first slide into second base against New Mexico in the third game of the season paralyzed Cory Hahn from the chest down, he did something amazing.

He threw a baseball.

In the 40 year history of Packard Stadium, of all the super regionals and national championship teams, perhaps its last night saw one of the most special memories.

At the final game at Packard Stadium against Abilene Christian, Hahn was wheeled out to where the dirt of the batters box meets the infield grass beyond home plate. After a long standing ovation from the crowd, he mustered enough strength to get the ball nine feet across the plate.

LA Times writer Bill Plaschke recounted the day before the first pitch in a column he wrote not long after that incredible night:

He had not thrown a baseball since the accident at second base in the third game of his freshman season. He wasn't even sure throwing a baseball was possible. His left arm had gained some strength, but his fingers still had no ability to grip. How was he going to hold it? How was he going to propel it forward? How far could it really go? The day before the pitch, Cory and his father, Dale, visited an empty bullpen, found a bucket of balls, and started practicing. The father had played catch with the son for years, but never like this. The actions were awkward. The memories were painful. Yet they kept working at it, throw, drop, throw, drop. Cory finally realized he needed to put pine tar on his hand to keep the ball from falling out, leading to the joke he could be the first ceremonial first-ball pitcher to be ejected from a game.

Hahn became a player-coach for the Sun Devils after the injury and graduated from Arizona State in May. The Arizona Diamondbacks have hired Hahn on as a scout while the Arizona State baseball team will move to Phoenix Municipal Stadium next season.