We've made it to the quarterfinals of our Moment of the Year tournament . Which season-long goal was the better achievement?

As we move on to the quarterfinals today, here is an updated bracket: 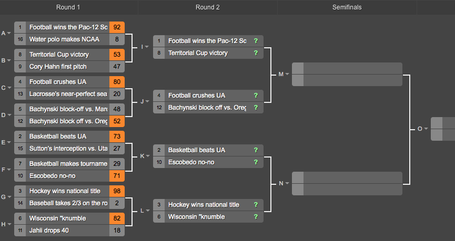 The Territorial Cup Series began four years ago, and up until this season, it had been the exclusive property of the University of Arizona.

The Series encompasses all 20 NCAA Division I sports in which both sports compete. A point is granted to the school that wins the most head-to-head meetings in that sport, or in the case of sports like swim or track, whichever school finishes better at the Pac-12 championships. In the case of a sport like basketball, where the schools have two meetings, a half-point is awarded for each victory.

While football's Territorial Cup is the trophy that holds the history and prestige, the Series trophy is one both schools badly want. Arizona took the trophy in every year of existence. Arizona State clinched its first Series victory this year when golf finished three spots better than the Wildcats at the men's golf Pac-12 tournament on April 27.

Football winning the Pac-12 South (86%) takes it over winning the Territorial Cup series (14%).