ASU Moment of the Year quarterfinals: No. 2 Basketball beats Arizona vs. No. 10 Dallas Escobedo no-hitter

These two moments happened less than a month apart and just across Rural Road from each other.

Share All sharing options for: ASU Moment of the Year quarterfinals: No. 2 Basketball beats Arizona vs. No. 10 Dallas Escobedo no-hitter 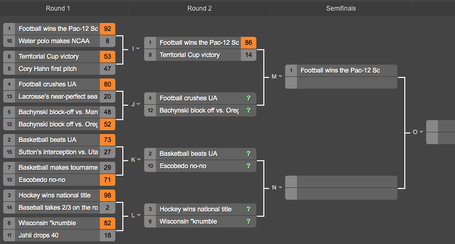 Today Dallas Escobedo takes on the Arizona State men's basketball team for a spot in the semifinals.

It is no surprise that the biggest victory in the Herb Sendek era makes it on our list of the best moments from this past athletic season. What makes it a little sweeter is that the victory came against arch rival Arizona.

Ever since Dallas Escobedo first brought a Women's College World Series title to Tempe during her freshman year in 2011, expectations have been exponentially higher for the program. Although the team only made the Super Regionals in Escobedo's senior campaign, one of the top highlights of the season was her no-hitter vs. Longwood on Mar. 5.

It also happened to be a very rare walk-off no-hitter for the Sun Devils. Escobedo had already faced her last batter in the top of the seventh inning but still wasn't sure if she had a "no-no" because the game was still tied at zero thanks to the almost equally impressive work of Lancer pitcher Elizabeth McCarthy.

In the bottom half of the seventh inning Bethany Kemp singled and then found herself at third base after a single by Elizabeth Caporuscio. Nikki Girard came to the plate and grounded a ball to the second baseman, who attempted to throw Kemp out at the plate but she avoided the tag and Escobedo had herself a no-hitter as well.

Escobedo walked three and hit one batter while striking out 13. It was the third no-hitter of her career.

Basketball wins over the Escobedo no hitter.