ASU Moment of the Year quarterfinals: No. 3 Hockey national title vs. No. 6 Wisconsin 'knumble'

Victory is sweet for the Sun Devils, but which memorable win was better?

Share All sharing options for: ASU Moment of the Year quarterfinals: No. 3 Hockey national title vs. No. 6 Wisconsin 'knumble'

On Wednesday, basketball beating Arizona (68 percent) was victorious over Dallas Escobedo's no hitter. 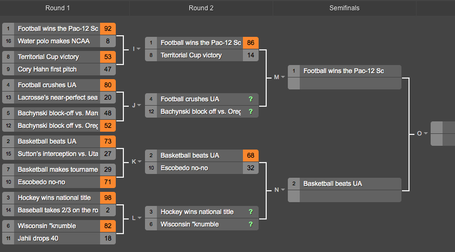 Today's matchup pits the downright odd versus a team that was the best of the best.

Seed No. 6: The "knumble" against Wisconsin

It was one of the most controversial finishes to any college football game in recent memory and it will go down in Arizona State football lore as one of the craziest and absurd finishes of any game in the history of Sun Devil Stadium.

It has affectionately been termed "the knumble."

18 seconds remained on the clock in the fourth quarter. Wisconsin quarterback Joel Stave hiked the football, ran to the middle of the field and what happened next can simply be described as chaos on the football field.

The night of the game we wrote an article trying to explain everything and who might be to blame. Multiple fans in the stands who we've spoken to since that night said they were simply looking around unsure of what was happening and before they knew it the game was over.

Regardless of what happened, the way it all unfolded and the controversy surrounding the entire incident will not soon be forgotten.

Hockey gets the win over the knumble.