ASU moment of the Year semifinals: No. 1 football wins Pac-12 South vs. No. 4 football crushes Arizona

Two great moments for Sun Devil football fans, but which was the best moment on the gridiron?

Share All sharing options for: ASU moment of the Year semifinals: No. 1 football wins Pac-12 South vs. No. 4 football crushes Arizona

Saturday, hockey's national championship advanced to the Moment of the Year finals with a convincing win over basketball's upset win against Arizona. 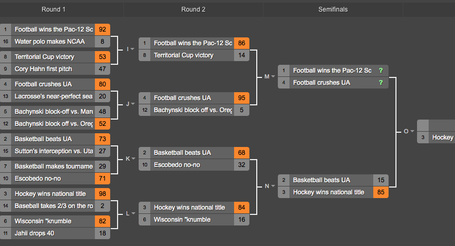 Only one spot left to be determined, and it is a showdown between two great Arizona State football victories.

Seed No. 4: Football beats down Arizona