The team celebrates its first national championship in Newark, Delaware on March 11, 2014.

After weeks of fan voting, it is official: Arizona State hockey winning its first national title was the Moment of the Year.

Hoisting the Murdoch Cup signaled the end to the greatest season in program history. The team was ranked No. 1 in the ACHA for most of the season, it extended its winning streak against rival Arizona to 37 games, winning seven of the eight games they played, won the Western Collegiate Hockey League in its inaugural season, and finished with a 34-2 regular season record.

On March 11, Arizona State matched up against Robert Morris with the national title on the line. Both goalies- Arizona State's Robert Levin and Robert Morris' Anthony Petrak- stood on their respective heads throughout the contest, making save after save before Ryan Ostertag broke through with two goals for the Sun Devils.

Arizona State could feel it. And just as the team was ready to storm the ice, Robert Morris re-entered the game with a goal with just four minutes left. When Robert Morris pulled its goalie with less than a minute left, Troy Scott iced the game for Arizona State with an empty-netter to clinch the title.

It was coach Greg Powers' fourth year at the helm, and it was his first senior class. It was the core that he recruited to Tempe, and in their last game wearing the pitchfork on their chests, they went out as champions. 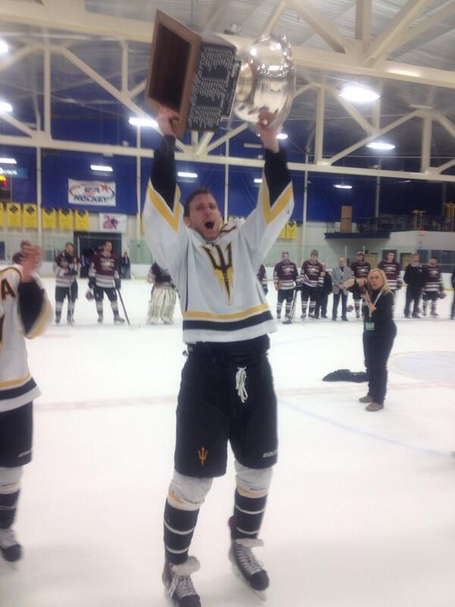