Here are the details on the new uniforms.

Share All sharing options for: ASU Football: New uniforms unveiled to the public

Arizona State added the color copper to the ever-expanding list of colors used in their uniforms, unveiling a new look dubbed "desert fuel" on Monday morning. The new uniform is an option for this season, but the team has yet to decide which game they will wear it in.

The uniform itself is grey with a copper and white gradient on the numbers. The helmet is white with a small copper pitchfork on the side with a copper face mask and copper stripe down the middle. The copper color is a nod to the state itself, which has historically been the most abundant mineral in Arizona with copper mines littering the area.

"We love the maroon and gold, and it is well represented in our uniform options. But we are also fortunate to be a part of a university that prides itself on change and the ability to break the mold," athletic director Ray Anderson said. "With the support of a great partner in Nike and tremendous donors, we are able to explore new and unique ways to represent our home state of Arizona as well as continue to reimagine Sun Devil Athletics." 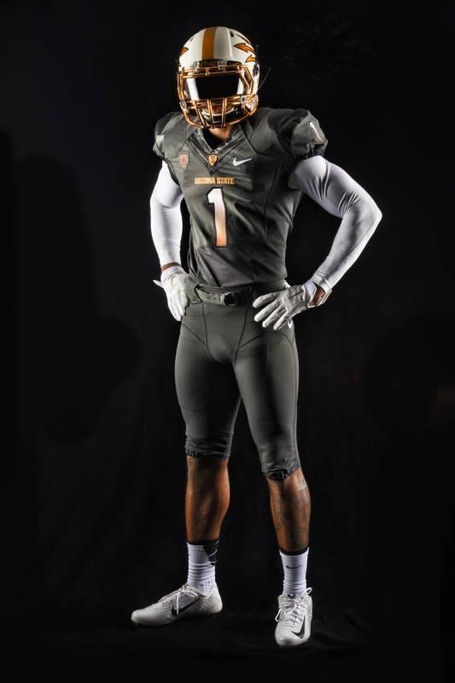 The team saw the uniforms last week and the Sun Devils started a social media countdown leading up to the Monday unveiling. This is the 10th helmet design for the team in three seasons, the Sun Devils also now have four options for jerseys and five for pants.

"We wanted to pay homage to this great state while keeping the team's look consistent," head coach Todd Graham said. " We are one of the top few teams in the nation with as many looks and combinations as we have, and this plays an important role in building a national fanbase and molding Arizona State University into a household name." 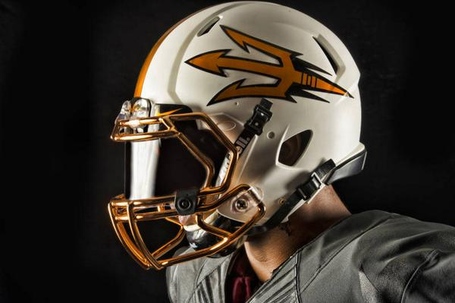 The Sun Devils also wore a new helmet that included a charred look on the fasemask and flames on the helmet last season against Notre Dame in Dallas. The other addition last season was the "big pitchfork" helmet, with an enlarged pitchfork on one side and each player's number on the other, which debuted in the "maroon monsoon" game versus USC.

The Sun Devils have continued to expand their repertoire of uniforms by working with Nike since the rebranding of the entire Arizona State logo and look in April of 2011, spearheaded by former athletic director Lisa Love.

An entire photo gallery of images can be found here.