For the second year in a row, the Sun Devils will enter the season ranked in the ACHA's top spot.

As expected, Arizona State hockey will enter the season with the No. 1 ranking.

In the preseason poll released Wednesday night, the Sun Devils received all 27 first-place votes. It is the second year in a row they were ranked No. 1 to begin the season.

The preseason poll is done by a vote by the coaches, giving the computer time to collect data, much like the BCS rankings for football.

The ACHA moved to a computer ranking for midseason polls last season, combining factors including goal differential and strength of schedule. Arizona State spent almost all of last season in the top spot, briefly dropping to No. 2 in early November before beating No. 1 Minot State.

Arizona State begins its season Friday against No. 20 Niagara.

Here is the full poll, courtesy of ACHAhockey.org: 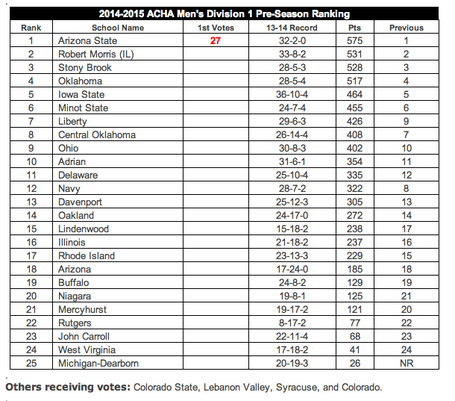