In most collegiate sports, large and prominent programs will open up their season playing cupcake teams. Unlike in the pros, college sports don't have a preseason, so strong squads tend to schedule weaker teams early in the year to serve as a warm up of sorts.

Fresh off a national championship, Arizona State hockey opened up their title defense on Friday night with the first game of a two-game series with Niagara. The Purple Eagles aren't known as a nationally relevant team, as the small school from New York collected only 15 wins last season compared to Arizona State's 38. But the Purple Eagles came into the 2014-15 season ranked No. 20 in the ACHA, and they gave the Sun Devils a valiant shot. Arizona State, paced by a Ryan Ostertag hat trick, emerged with a convincing 8-3 win, but head coach Greg Powers had some concerns regarding the blueline after the victory.

"I thought they were just okay," he said. "They were a little shaky coming out of the zone. They need to do better, and they will."

Goalie Robert Levin allowed three goals for only the second time in his career, with the first coming in the semi-finals of the 2014 tournament. The Sun Devil defense is full of fresh faces that haven't played much together, and their lack of experience showed on a few Niagara shots.

"We have a very talented D that love to jump up into play, and I encourage that," Powers said. "But somebody out there has to recognize when that takes place and drop back, and that didn't happen a couple times and they made us pay for it once."

Arizona State opened game with a raucous crowd that came to support the defending national champs, but the Sun Devils went down a man early, as a hooking call on Brett Blomgren gave Niagara a power play out of the gate. The Sun Devils killed the power play, and right when Blomgren returned, Arizona State's offense clicked into gear. Senior Liam Norris scored the season's first goal for Arizona State, taking a Ryan Ostertag assist and punching it in the net for a quick 1-0 lead. The two teams spent the remainder of the first period trading shots on goal, with Niagara testing Levin multiple times. The Purple Eagles nearly tied the game with 9:02 left in the opening period when a shot pulled Levin a couple of feet away from the goal, and the puck fell into the lap of an unguarded Charlie Chamberlain, who had an open goal right in front of him. But he couldn't corral the puck before Levin got in the way, and Arizona State led 1-0 after the first period. 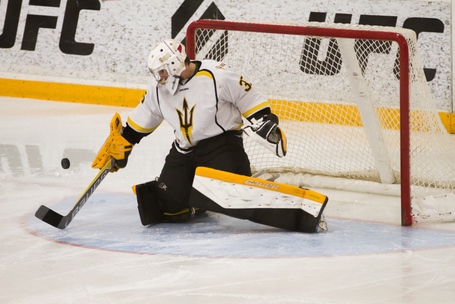 Arizona State scored to give itself a two-goal game in the third period. That meant Powers kept his attack on full throttle, and the team delivered. Michael Cummings and Connor Mailey each scored early goals to put the game out of reach at 6-2, and then Ostertag put on a show only he could provide.

The sophomore scored his second goal of the night with just under 14 minutes left to play, picking up a deflection and, with his momentum carrying him away from the goal, flipping it into the net backhand for a jaw-dropping goal. In garbage time, Ostertag picked up another score, getting past the defense and easily scoring on the Purple Eagle goalie. Niagara scored their own garbage time goal to bring the final score to 8-3.

On his hat trick, Ostertag commended the rest of the Sun Devil front line.

"I think our lines were really good tonight, we've spent a lot of time together the past couple weeks," Ostertag said. "We were moving the puck really well, everything was working."

With their first game as champions under their belt, Powers recognized the difference in intensity that being a national champion provides.

"We're going to get everybody's best effort," Powers said. "Teams are going out of their way to make big hits. You have to skate that much harder and it's going to be more physical on the body."

The Sun Devils take on Niagara again on Saturday, and Powers discussed the possibility of resting Levin after his performance on Friday.

"We don't have to put him in. We'll have to get together as a coaching staff and figure out what the lineups are going to be," Powers said. "There probably will be some changes. We didn't get a couple of kids that we wanted to get in tonight in, so we'll know by tomorrow midday."