It may not have been the prettiest game, but the win elevated the Sun Devils to 2-0 on the season, in part due to the second goal in two nights by Tommy Cooney (pictured above).

After squeaking out a 4-3 win, Arizona State will certainly take the victory, but it was far from dominant.

"We're in the business of winning hockey games, and we just won two," coach Greg Powers said. "We'll go back to the drawing board and go into next weekend."

Arizona State (2-0-0) got out on upset alert late in the first period, when Niagara (1-2-0) broke out of its own zone on a two-on-one. Arizona State finished a power play, leaving Gianni Mangone as the only defenseman back when Niagara broke out.

The Purple Eagles' junior forwards Josh Pietrantonio and Austin Wharry were all alone with Mangone. Pietrantonio came along the left boards, sauced over to Wharry, who went backhand to beat Arizona State goalie Robert Levin gloveside. That gave Niagara a 1-0 lead with 1:33 left in the period.

Mangone would not let that bother him, though. As soon as the second period started, he was ready to go, and less than a minute and a half into the frame, unleashed a slapshot from the point, which went five-hole on goalie Mike Parda to up the game.

"Coach just said in the dressing room start shooting the puck more across the blue line and thought, why not get on net," Mangone said. "Thankfully it went in."

From there, Arizona State put in the next two goals. The first was by freshman defenseman Eddie McGovern, the second by sophomore forward Tommy Cooney.

Cooney in particular, Powers said he was glad to see. He said even last year that Cooney was a player waiting to explode, and Cooney's rooftop shot in the second period was his second goal in the two games so far this season.

"I expect production out of him," Powers said. "The best is yet to come from him."

With 2:04 left in the game, sophomore forward Ryan Ostertag found the net to seemingly put the game away. But Niagara answered right back with a goal 14 seconds later. The Purple Eagles pulled their goalie with 20 seconds left in the game, but it wasn't enough, and the Sun Devils held on for the win. 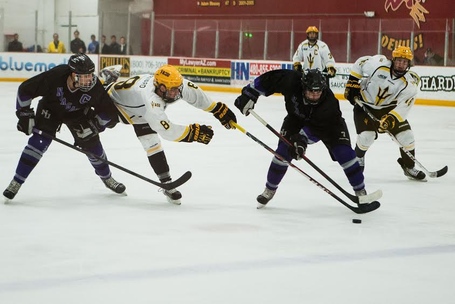 Third star: Mike Parda, goaltender, Niagara. He made 44 saves and survived an onslaught all night long.

Second star: Tommy Cooney, forward, Arizona State. Put in the third goal of the game, giving his team a 3-1 lead heading into the third period. It was his second goal in as many nights.

- In his freshman season last year, Levin allowed three goals in a game only once. Through the first two games in 2014, he has done it twice.

"He's clearly not himself," Powers said. "He's shown a chink in his armor. But every great player goes through that, and he's a great goalie."

- In discussing the performance of the blue line, Powers immediately jumped to the play of captain Brett Blomgren.

"Our captain has to be better, period, end of story," Powers said. "He's made mistakes two nights in a row now that the guy wearing the "C" cannot make form the back end.

- The power play was unable to score, and did not look particularly good in its chances. Powers said they were new units, and it will be an emphasis in practice this week.

Arizona State returns to the ice next Friday to face West Chester, then plays the same team again Saturday. Both games are at 7:30 at Oceanside Ice Arena in Tempe.