Arizona State only led 4-0 in the third period. By no means disappointing, but after the 14-0 drubbing Friday night against West Chester, it seems like it was just a matter of time before the gates opened.

"It's not that we try to run up the score on anybody, but we also understand the importance of winning games by (nine) goals when you can," coach Greg Powers said, referring to the computer rankings that take into account goal differential. "We're aware of that, it's a stat, it's reality and we always try to accomplish that if we can."

McGovern's goal started a stretch where the team scored five times in less than four minutes of play. Among those was a goal by sophomore forward Eric Rivard, completing the hat trick. He scored his first to start the scoring in the first period, and nailed his second late in the second.

He added two assists, tying the team-high for points in a game this season, matching Ryan Ostertag's five on opening night.

He had a goal and two assists, but even that doesn't do justice to the night Connor Schmidt had. The sophomore defenseman was everywhere, orchestrating offensive rushes, keeping the puck in the attacking zone, playing a lockdown defense and throwing himself into West Chester players.

"I like to play with a chip on my shoulder," Schmidt said. "I know I'm not the biggest guy, but adding physicality to your game lets you, if your offense isn't going one night, it gives you something to rely on." 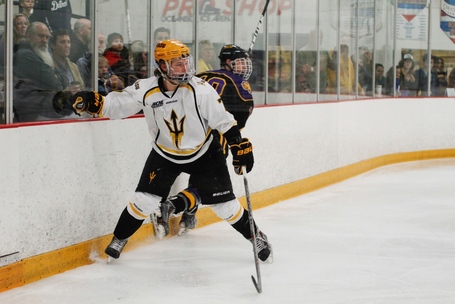 Schmidt's assist was a thing of beauty. Standing at the top of the left circle on a power play, he collected a pass from freshman Ed McGovern at the top of the point, which he sauced to the other circle. Junior Ryan Belonger was waiting, and he one-timed it top-shelf for the goal.

Schmidt said he and McGovern got switched up on the play, and doesn't normally position himself on the goalie's left side.

"I felt a little opening and I know (Belonger) puts in pretty easily," Schmidt said.

Belonger also had another goal, which he netted with 6:36 remaining in the game. It was second night in a row having two goals in a game.

Arizona State had six penalties on the night, including a five-minute major on sophomore forward Michael Cummings for cross-checking. It was in retaliation for a shot tin which the referees missed the penalty on a check to junior forward Chris Blessing.

"Some of (the penalties) bothered me, but when they're protecting a teammate I'll never get angry about it," Powers said. "Our guys were tired of getting hit up high, so Cummings took issue with that and was protecting as teammate.

Third star: Ryan Belonger, forward, Arizona State. Had two goals, including a beautiful one-timer on an assist from Schmidt in the first period.

First star: Eric Rivard, forward, Arizona State. A hat trick, two assists and the first star. All in a night's work for Rivard.

- Last weekend Powers said he wanted to see the power play improve, which it did, to the tune of going 9-for-13 in the two games.

- Sophomore goalie Robert Levin recorded his first shutout of the season, blocking all 15 shots to come his way.

- Senior forward Liam Norris was a healthy scratch Saturday night. Powers said West Chester was hitting hard and did not want to risk an injury.

- Sophomore forward Patrick Yudez sat out with an ankle injury. Powers said it was minor and did not expect him to miss extended time.

Arizona State returns to the ice next weekend when it travels to North Dakota to play Minot State in a two-game series. The next home series is Oct. 10-11 when rival Arizona makes its first trip to Tempe.