What should you be watching for when the Sun Devils play their maroon and gold game?

Share All sharing options for: ASU Hockey: Three things to watch in maroon and gold game

The pucks drops on the first Arizona State hockey game of 2014-15 in two weeks, but Friday night is when the season starts for real. The annual maroon and gold games starts at 7 p.m. at Oceanside Ice Arena in Tempe and is free to the public.

There are few interesting story lines to watch as the preseason ends and the regular season behind, and we've compiled a short list for you.

The arrival
The most highly anticipated transfer in school history will strap on skates as a Sun Devil for the first time, when Ryan Belonger makes his Arizona State debut Friday in the maroon and gold game.

"I told him I just want him to come out and embrace being here and have fun," coach Greg Powers said. "I think a kid like that, who's really high-level and talented, if you can get him focused on really loving coming to the rink every day and being apart of your program, you're going to get the most out of him."

The forward from Northeastern University played 60 games in two years with the Huskies, so it's not as if he was disgruntled because he never dressed. He also took part in the Frozen Fenway in January, where his Northeastern team took on UMass Lowell in january. He played two years of NCAA hockey, which means he comes to Arizona State as a junior.

"Tough to say because Kale won us our first title," Powers said. "But I believe Ryan certainly has the ability to have that type of impact. Kale is not replaceable on any level."

Who makes the team
While Belonger is a lock for a roster spot, that does not hold true for everybody. There are 35 players who will skate in Friday's scrimmage, and only 30 will make the team. Of those 30, only 21 will dress to play, and Powers said those decisions could be made in the coming days.

"Is our roster 100 percent decided, no. Is it mostly decided, yes," Powers said. But we have a game in two weeks. And a lot of what that lineup is going to look like will be based off of how they look and how they approach this entire week, mostly the maroon and gold game."

He specifically named forwards Chris Blessing, Michael Cummings, Zack Holstrom and Tommy Cooney as players he would like to see perform well.

"This is their time to shine, and prove why they need to be an everyday guy," Powers said. "Those are the battles I'm most interested in, not the battles for roster spots." Other players who could see their stock rise Friday night are Coda Engbar, Ryan Francis, Daniel Gowans and Kyle Bowen.

How the lines look
Powers announced that sophomore Sean Murphy would play on the wing this season, and hinted he would be on the top line with center Liam Norris and winger Ryan Ostertag. Murphy spent time as a winger and a centerman last year, and Powers evidently decided that putting Murphy with Ostertag and Norris could be a deadly line.

Murphy on top begs the question of where Belonger will play. Presumably now on the second line, but it was expected that as a former NCAA Division I forward, he would play on the top line. Of course Belonger will be a top-six forward for the team, and who plays first or second line is nitpicking. For what it's worth, he is listed as a center for Friday's game.

As for the maroon and gold game, Norris will not be there because of a prior commitment he could not miss and was excused for the game. What Norris' absence means is that freshman Mak Barden will get a chance to showcase what they can do playing between two dynamic scoring threats in Murphy and Ostertag.

Jordan Young, junior defenseman and assistant captain is scratched for Friday night. He had offseason shoulder surgery and is expected to miss a sizable amount of games to begin the season, even as much as the entire first half. He has skated in preseason conditioning camp. 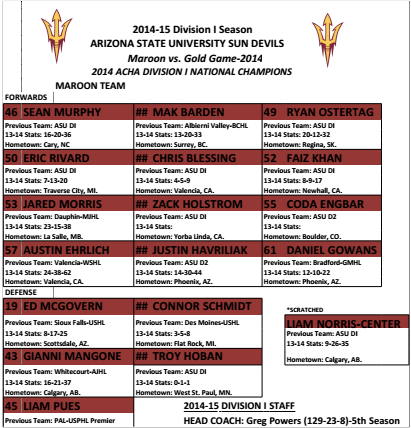 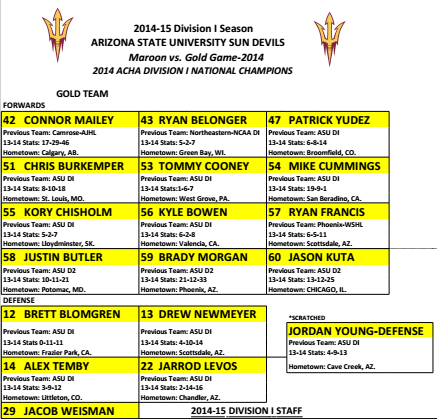