Arizona State baseball is back in the postseason for the 15th time since 2000, and this year’s team will begin their road to Omaha as the No. 2 seed in the Fullerton Regional.

For the third straight year, the Sun Devils will head to the state of California to start the NCAA Tournament. Last season, the team played in the San Luis Obispo regional, and were eventually eliminated by Sacramento State. The year before that they were in Fullerton, advancing all the way to the regional final before getting taken out by the Titans.

The maroon and gold are heading back to Goodwin Field this weekend to try and avenge that loss two seasons ago. Here is your Fullerton regional preview.

The Titans have one of the worst win-loss records of a non-power conference host in tournament history, but the selection committee loved their hot finish to the regular season. Winners of 13 of their last 15, this club is coming into the postseason oozing with confidence. They also won the Big West by a full three games over fellow regional host UC Santa Barbara.

Cal State Fullerton is led by a deep and balanced pitching staff. It has not allowed more than four runs in a game in over a month, and the team ERA sits at an impressive 2.85.

Lucky for Tracy Smith's club, the Sun Devils will likely not have to face junior Thomas Eshelman, the leader of the Titan rotation. One of the top aces in the nation, Eshelman owns eight wins, five complete games, and a 1.57 ERA. He has only walked six batters in over 114 innings, and averages nearly one strikeout for every frame he pitches. The decision of when to throw the right-hander will be huge in deciding the winner of this regional.

The Sun Devils finished in a tie for third in the Pac-12 in 2015, and were in contention to host a regional until a series loss at USC on the final weekend of the regular season. They will be eager to put together a better performance than we saw in last year's tournament, when the team was upset by lower seeds in a pair of one-run ballgames.

The maroon and gold are led on the mound by southpaw Ryan Kellogg. The junior went 8-2 this season with a 3.67 ERA. He typically serves as the team's second starter, and that would be ideal this weekend since a Saturday matchup with Cal State Fullerton is likely.

Arizona State is loaded on offense as well. Seven everyday starters are currently batting above .300, and Colby Woodmansee already has an insane 43 RBIs this year.

This Clemson club looked like it was left for dead back in early April, sitting at 16-17 with numerous bad losses on its schedule. Slowly but surely, however, the Tigers started playing up to their potential. A road sweep of Florida State two weeks ago got them onto the bubble for an at-large bid, and a blowout victory against Louisville in the ACC Tournament sealed their spot as the last team in the field of 64.

A pair of elite pitchers, both lefties, will make the bubble boys a tough out in the Fullerton regional. They will likely turn to junior Matthew Crownover (10-2, 1.59 ERA) for Friday's opener against the Sun Devils.

As if the regional wasn't already strong enough, Pepperdine comes in as one of the stronger four seeds in the field. The Waves earned the WCC's automatic bid after winning their conference tournament.

Last season, the maroon and gold dropped their first game of the San Luis Obispo regional to Pepperdine, so there will definitely be revenge on the minds of Arizona State's players if the two were to meet again sometime this weekend.

RHP Thomas Eshelman: The junior is the ace of the Titan staff and was named as a semifinalist for the Golden Spikes Award last week.

LHP John Gavin: While his performance this season has been overshadowed by Eshelman, the freshman is very dangerous as well. He is 7-2 this season and would likely start against the Sun Devils if both teams won their regional openers.

LHP Ryan Kellogg: While Kellogg has struggled occasionally with his command this season, head coach Tracy Smith would want no one other than the junior left-hander on the mound to start a big postseason game.

SS Colby Woodmansee: The team's RBI leader has started every game this season and enters the postseason with a .314 average at the dish. Woodmansee has a knack for clutch, late-game hits and can flash the leather at short when needed.

LHP Matthew Crownover: Likely the Tiger starter for their opener against the maroon and gold. Will not blow anyone away with his fastball but consistently pounds the strike zone.

LHP Zach Erwin: The junior completes the dynamic duo on the mound for Clemson. Like his fellow southpaw listed above, Erwin has a sub-3.00 ERA and has posted a 7-4 record so far this season.

RF Brandon Caruso: A first team all conference selection, Caruso is the only Pepperdine regular hitting at above a .300 clip.

RHP Kiko Garcia: The freshman from Chula Vista has served as the team's closer for the majority of the season. He leads the Waves with eight saves and can eat up innings out of the bullpen, a much-needed trait for teams that have to come out of the loser's bracket during a regional.

All winner's bracket games from Fullerton will be televised on ESPNU, in addition to Saturday's elimination contest. The remaining games can be viewed on ESPN3, while ESPN Bases Loaded will be featuring live look-ins and analysis. 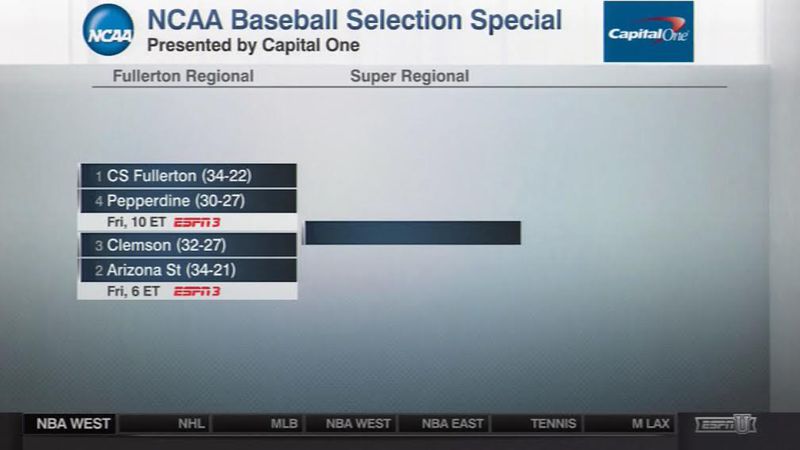